The fully three dimensional funerary effigies which proliferated during the 14th and 15th centuries are conspicuous and highly recognisable. Many were created in workshops which basically worked out individualising details on very stereotyped models. They were good models and they look very splendid, but it is interesting that as competition in social stratification ramped up and more people from the upper orders were commemorated in this way, these high status goods became standardised. They were Rolex watches or Mercedes cars, not old master art works.
Some other styles of depiction appeared quite early in the era of effigial tombs and continued. They can be found dotted around the place. The are often described as oddities, but they have some of their own traditions, and the symbolism of liminality and prayer and purgatory is built in, just as in the standard workshop effigies. 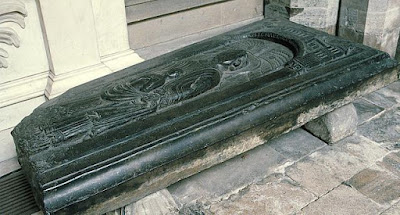 The earliest tombs in the full sized effigy tradition were of senior churchmen, such as this one of Bishop Nigel (d.1174) in Ely Cathedral. They tended to have an effigy lying under an architectural canopy, set into a solid slab. The above has the added gorgeous detail of the bishop's soul being carried in a napkin; the ultimate symbol of liminality and one that recurs here and there. Many of these tombs were made from local British marble; Purbeck, Frosterley, Alwalton and other local names which indicate their origin. 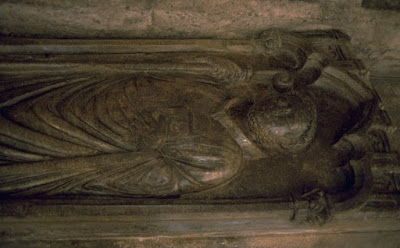 This 13th century abbot from Peterborough is in a similar tradition. The British marbles are not true marble. Marble is metamorphosed limestone which has been subjected to heat and pressure so that its internal mineral structure is completely changed, becoming very internally uniform and hard. British marbles are incompletely metamorphosed, so they are softer and can still contain recognisable structures from the original sedimentary rock. Seashell fossils are common, for example, in Purbeck marble and so are interesting to geologists and palaeontologists as well as medieval tomb enthusiasts.
So while they polish up to a beautiful, marbly, shiny surface, they are a bit fragile for fully three dimensional effigies, and the slabs themselves come in thinnish layers. So these early effigies are designed to fit the materials and still look impressive. The bodies are not fully cut out in the round and hands may be depicted flat rather than as flimsy projections. The half rounded effigies lying flat within their arched canopies can almost be seen as bodies within their coffins, not yet fully dead, not yet fully resurrected, but the coffin lids are open. Liminality again. 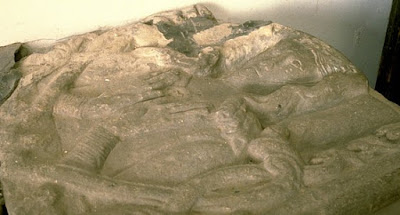 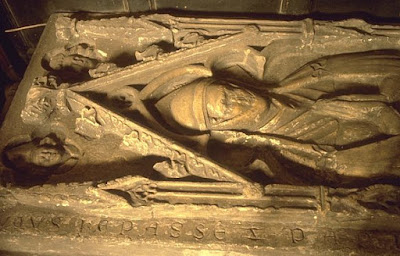 This 13th century tomb to a Lady Margery at Wistow in Yorkshire is in similar tradition. She lies under an architectural canopy that looks like it ought to be vertical, but being horizontal could serve enigmatically as an open coffin. She holds rosary beads to remind you to pray (not visible in the above picture). Above the gable of the canopy are two heads in quatrefoils, one of a bishop, another a man's head. It's not quite clear who they are supposed to be. They could be gazing down protectively from above or represent family left behind, looking up. 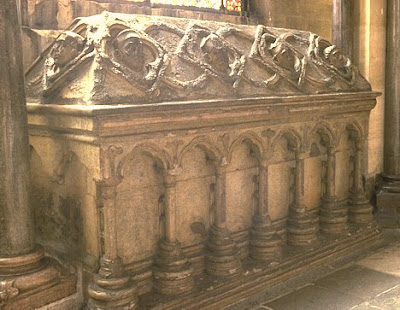 The tomb of Archbishop Hubert Walter (d.1205) in Canterbury Cathedral, which has no effigy, displays heads in quatrefoils around the coped lid of the tomb. It was a thing, if not a very common thing. 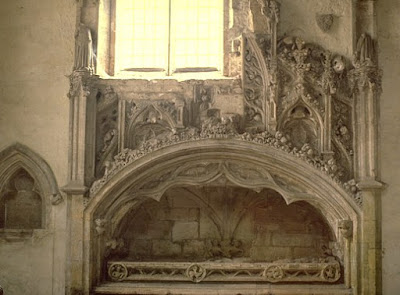 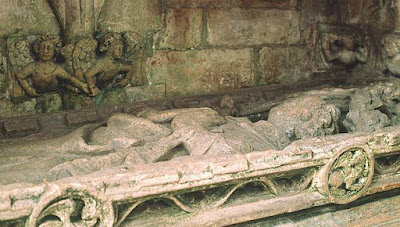 The lying in an open coffin depiction occasionally occurs in later  tombs, and is not necessarily a cheap and easy alternative to the fancy but stereotyped workshop tombs. This exceedingly maltreated Decorated canopy of the early/mid 14th century covers an effigy of a priest set into a very fiddly openwork container. It is in a little known parish church of Welwick in the Holderness area of East Yorkshire and the resemblance of the fruit salady cornucopia of the superstructure to that of the Percy tomb in Beverley Minster is probably not coincidental. It would have been quite a grand thing in its day. The hand holding angels are rather sweet.
The openwork coffin was also used in cadaver or transi tombs, as discussed in an earlier post, to allow the pious a peek at the gruesome lower layer decomposing nicely there.

A simplified variant on this mode of depiction may just show a bust or head of the effigy and sometimes the feet, the middle part just being a plain slab. The above example is from Wadworth in Yorkshire. The architectural canopy doubling as a coffin is there, with the visible face, hands and feet suggesting that liminal time before the process of death is complete. This may be a cheaper form of commemoration than getting a full sized effigy shipped up from an expensive fancy workshop, but it contains all the necessary symbolic elements. 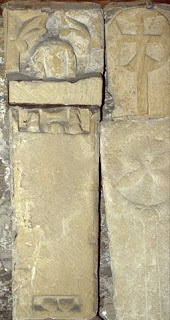 This rather strange, lumpy example is from Bakewell church in Derbyshire, where dozens of old grave slabs have been re-erected in the church porch, suggesting that not only cost but church expediency may have played a part in developing this style of tomb. After all, how many crosslegged knights and ladies in flowing gowns can you accomodate in one church before they become a health hazard? At least you can walk on these, as with brasses. 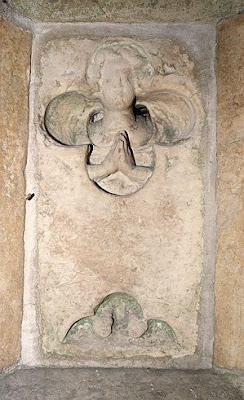 This slightly odd effigy of a priest from Moor Monkton in Yorkshire displays the head and hands in a quatrefoil, vaguely reminiscent of those details on tombs shown above. 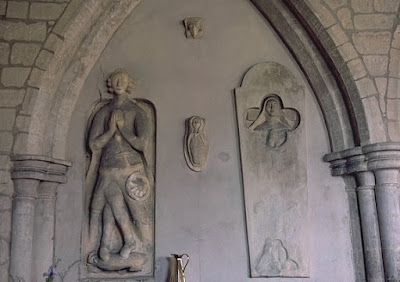 Some seriously bizarre renovating, retooling and relocating has occurred with these effigies in Skerne church, East Yorkshire, but the lady definitely has her head sunk in a quatrefoil. No, I don't know why the knight has a round shield or a barrister's wig. Best not to ask probably.

These tombs can be in pretty worn and battered condition, probably because they get walked on as much as anything else. Also one does wonder how many got turfed out of the church when more recent burials were placed there, only reappearing as historic relics during church restorations. The example above from Sleaford in Lincolnshire was always simple, with a head in a round hollow and a marginal inscription. 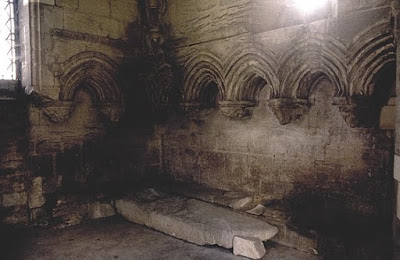 This weatherbeaten example from the tower of the ruined Templar church of Temple Bruer in Lincolnshire is so worn as to be barely recognisable as a tomb effigy.

Before effigy tombs were common, a much utilised depiction on a grave slab was the crucifix, sometimes very simply depicted just by itself; sometimes with a symbol of the deceased's occupation or status such as a chalice, keys or shears; sometimes with an inscription. The more elaborate examples sprouted foliage and are taken to be a hybrid of Christian symbolism and a tree of life motif, generally referred to as a floriated cross, or foliated by the pedantic. This is not closet paganism. It occurs in perfectly regulation Christian symbolism such as the Tree of Jesse. Christians practised agriculture as well. The particularly fine dark marble one above comes from Hedon church in East Yorkshire. 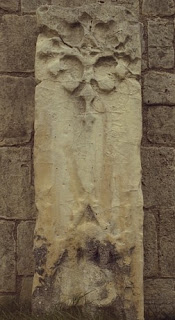 This example from Howden church in Yorkshire has a very rainwashed and effaced effigy bust under a canopy at the base of the cross. This combination also occurs in brasses, where a little figure might be kneeling at the base of a floriated cross or reside within the cross head. Cheaper, smaller, neater, not tripping up the parishioners, but quite charming. 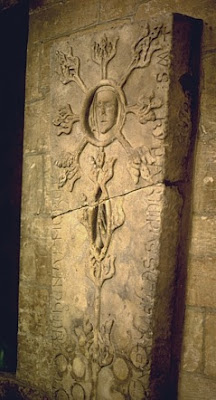 This slab in Sleaford church, Lincolnshire combines the face and hands sunk in the stone with the floriated cross, creating a somewhat unsettling green man type image. The habit of propping these up against the wall somewhat disturbs the liminality concept, as they are no longer looking upwards, pleading for a fast trip out of purgatory. 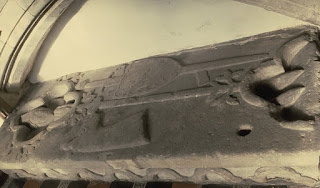 This example from Gilling East in Yorkshire has various appurtenances of a knightly tomb, sword, heraldic shield and crest, flattened and set into a composition with a floriated cross. It looks a little strange but is not just an aberration from the wilds of the rural north. It embodies all the standard symbolism and tradition. 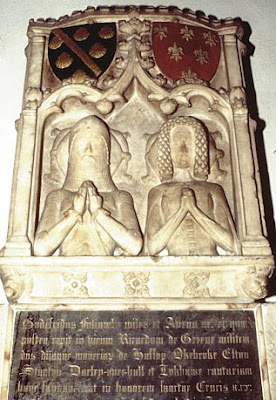 This funny little number from Bakewell, Derbyshire looks strangely anachronistic, but probably just because of its renovated setting and inscription. The knight and lady are standard mid 14th century in presentation, but in this case only the busts of the figures exist; no little toes in a trefoil. It is a wall monument, and presumably was meant to be, but the heads are nevertheless resting on pillows. The inconsistency between vertical and horizontal, as seen in larger tombs, is still present. The hands are praying. They are anticipating.

Some tombs really do seem to be unique. This pair of very worn and effaced effigies lie with their heads under a canopy, but their legs disappear under tracery or a vine motif. It seems an eccentric hybrid. It is in the church at Nafferton in East Yorkshire and I lived across the road from it at various times. The locals didn't reckon much to it. It does have a stylistic cousin in a nearby village. 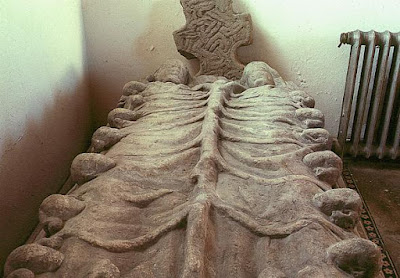 The church at Lowthorpe a couple of miles away has this example which is positively creepy. The two effigies lie under what may be meant to be a shroud with the tree of life motif spread all over the top of them, with very worn heads displayed at the ends of the branches. It has been suggested that they may represent their children, or that it has analogies with the Jesse tree, or both. Or do they represent their ancestors? Are the main figures at the top or the bottom of the tree? It very much personalises the usually abstracted floriated cross concept and suggests in a literal way the concept of the tree growing from the remains of the departed. So conceptually it is in the tradition, but in the specifics of execution, it has got to be unique. Nice Anglo-Saxon cross leaning casually against the wall at the head beside the historic heating pipes. 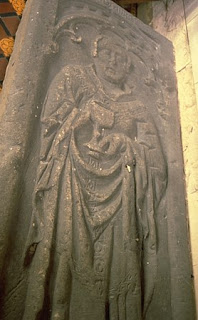 Low relief or part sunk effigies seem to appear in random places. This supposedly 16th century priest in mass vestments appears in the 19th century church of Scorborough, East Yorkshire, presumably salvaged from its predecessor. He holds a chalice, presumably to remind the faithful not only to pray for him, but that he holds the key to the salvation of others. I am still pondering the idea that ecclesiastical accessories, and most particularly the chalice, in priestly graves, are the only real grave goods found in medieval Christian burials. Were they the only things you really could take with you? 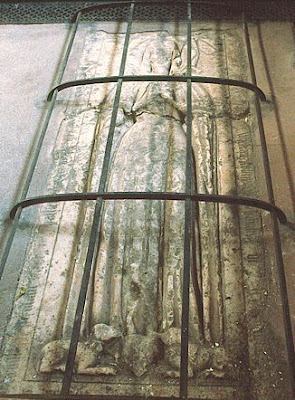 The tomb of Lady Furnival (d.1395) in Barlborough, Derbyshire, is carved from alabaster, but in the rather oldfashioned low relief mode rather than the standard midlands workshop mode. Don't know whether the metal cage is to keep her in, or to stop people walking on her.
So these effigies which diverge from the standard workshop models still conform to the traditions of symbolism and essentially use the same vocabulary. They grew out of the same developing effigial tomb tradition and form a web of traditional representation with other forms, such as the floriated cross slab. They are not ignorant local productions of rural yokels too poor to buy a proper shop tomb, but more individual expressions of the same religious and social sentiments.

Just a thought- the wall monument at Bakewell in which they apparently look through a window - the Foljambe monument - could conceivably be a pun on window jamb, a kind of macro-rebus. Slightly later French comparators can be seen at Jacques Coeur's house in Bourges, but they can hardly be relatable.

That is such a woeful pun it could even be right.