I have been attempting to painfully assemble a project from photographs and information from outdated multimedia projects on a visual and topographical history of parts of England, particularly relating to the changes to the built landscape at the Reformation. I'm trying to rough this out on Flickr so that others can look at it and play, as I have had it in my little bottom drawer for far too long.
Having tried a couple of small samples as an experiment, I am now walking my way through parts of East Yorkshire. Why East Yorkshire? Because I have rambled all over it myself. It isn't as well known as it should be. It shouldn't be too dauntingly complicated. That is, until I get to York, where there is such as thing as too much information. It is conducted as a guided tour with Leland for the immediate post Reformation era, Daniel Defoe and Celia Fiennes for late 17th/early 18th century changes and a miscellany of 19th and early 20th century antiquarians for later perspectives.
The last set looked at Hull, Hedon and surrounds, and concentrated on the changing nature of the Humber ports. This latest looks at Patrington and Holderness, that is, the part of it that hasn't been covered already. This is the most forgotten part of Yorkshire. None of our travellers commented on it extensively. It is a large triangle bounded by the North Sea, the Humber estuary and the wolds. Churches, villages and whole port towns have disappeared into the raging waters of the estuary and sea. 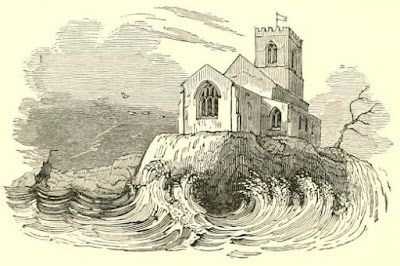 Owthorne church, for example, succumbed in the early 19th century. The area has one huge and magnificent church at Patrington, which was a port in its day. It is now a church with a small village around it, but full of sculpted treasures in the Decorated style. 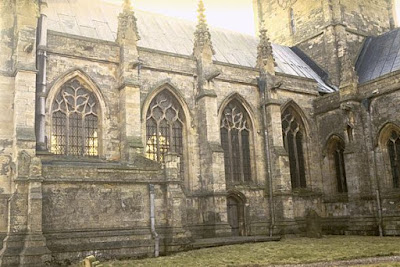 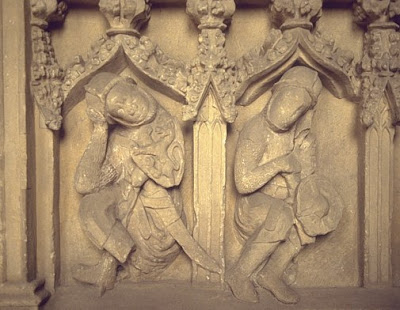 The detail above shows the sleeping soldiers on the Easter Sepulchre.
The area had no very big towns, but was relatively more prosperous in the middle ages than it became later. Many of the parish churches seem rather grand for their rural situation, and some of these fell into decay and were rebuilt in more modest style. 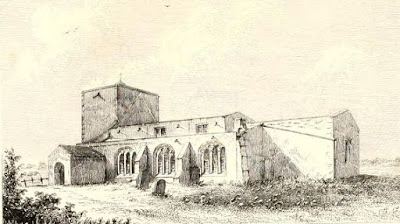 The once spacious church at Garton was in a pretty bad way when this drawing was made in the early 19th century.
There was only one major monastery in the area, the abbey at Meaux near Beverley. Not a scrap is left to be seen of it because Henry VIII had the whole lot carted away to build the defences of Hull. 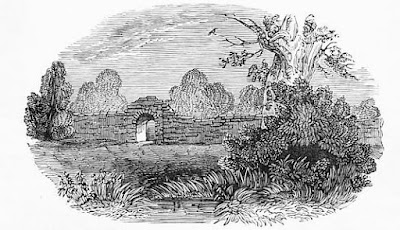 This bit of wall survived in the 19th century but I think even that is gone now.
There were a couple of small nunneries at Swine and Nunkeeling, but they decayed to basically nothing. 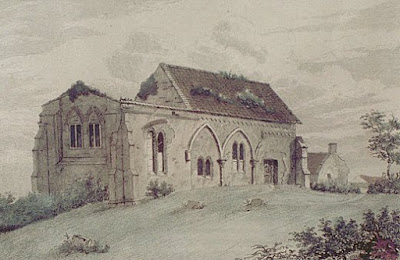 Nunkeeling church which is no more. Even its 19th century replacement has fallen to decay.
There are no towering castles, no walled towns. So what is here that is interesting? The churches have many little surprises, especially as it seems that assorted church reforms were not as forcefully prosecuted as in places that were easier to get to. 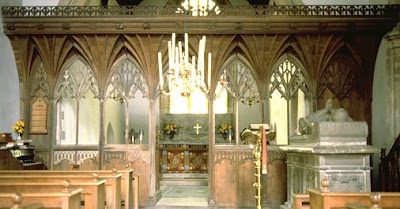 The rood screen of Winestead is one of several surviving, unfortunately without their paintwork. The 17th century tomb in front of it has all the medieval attributes associated with praying for the soul, apart from angels. There are some wonderful tomb effigies. 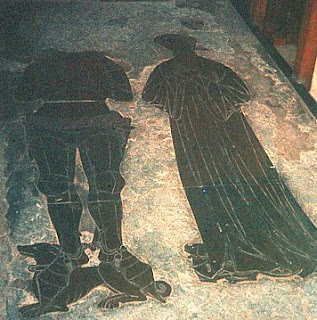 This battered brass at Brandesburton is a fine and unusual example of its type. 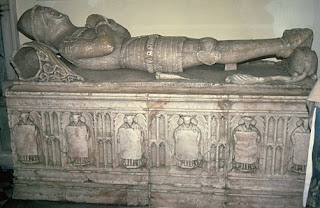 The knightly tomb at Barmston is not quite what you expect to find at the back of a seaside resort village.
As for the rest, just take a look. Go to the Flickr album linked above, click on the first picture and off you go. There is a map and links to Google Maps aerial views when these are interesting. The whole slowly growing collection of Leland Flickr tours can be accessed here.
Posted by Dianne at 6:47 PM