OK, so here I am dutifully typing up catalogue entries from scruffy old notebooks and sending files into The Cloud and vowing not to do anything fun until the job is done, when the family medievalist walks in with something he found while looking for something else in the London Metropolitan Archives, and I'm hooked. 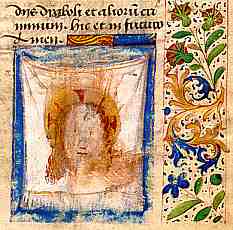 One of the things that has always intrigued me in my own collection of medieval manuscript detritus is the greasy finger marks which can be quite apparent on the edges of the pages. I'm sure there is some residual DNA in there, and we could clone ourselves a friar or a devout lay person or two. I even once snagged a tiny little miniature on an orphan page from a book of hours. It went cheap because it was smudged. As it was an image of Veronica's handkerchief, odds on it was smudged by having been kissed by its owner. To me that is value added, but not to the buying public apparently. But somebody else of significant stature in the medieval art history world has got right into this subject.
Kathryn Rudy has spent some time, effort and ingenuity actually measuring the amount of grot from finger marks on books of hours in order to work out which parts were read most frequently. A brief article entitled Measuring Medieval Dirt can be found on the website of the London Metropolitan Archives. Her longer article, Dirty Books, appears on the website of the Journal of Historians of Netherlandish Art, Volume 2, Issue 1. You have to look it up from the home page as it appears that the site will not let you in through a direct link. It is a long article, but unfortunately the many illustrations appear to have been removed. (They have since been restored.)
A couple of her main conclusions indicate that late medieval folks were a bit like us; they hit the indulgences pretty hard for fear of the hereafter, and they didn't manage to stay up late enough to complete the entire daily round of offices. Mortal humans all.
There seems to be a bit of lateral thinking going on in manuscript studies at the moment, with new ways of looking at things and new questions to ask. Those who claim that paleography is dead just need to broaden their definition of the term.
Posted by Dianne at 1:02 PM

I seldom leave comments on blog, but I have been to this post which was recommend by my friend, lots of valuable details, thanks again.

Awesome post. Do you mind if I ask what your source is for this information?

I think you will find that the references are actually there in the posting.

The illustrations for the Dirty Books article have been restored, with a fancy zoom interface.