A couple of posts ago I compared two programs in stained glass windows in York, one from the magnificent All Saints North Street. This one also looks at a window from that favourite church of mine, but compares it with a wall painting in the parish church of Pickering in Yorkshire. This is another in strip cartoon style, representing the Corporal Acts of Mercy. This theme is not so foreign or exotic as some in medieval iconography, as we are still carrying out those same functions today for our brethren who have fallen on hard times, whatever our religious persuasion, or lack of it.
The concept, unlike many in medieval Christian iconography, comes straight from the Gospels. "For I was hungred, and ye gave me meat: I was thirsty, and ye gave me drink: I was a stranger, and ye took me in: Naked, and ye clothed me: I was sick, and ye visited me: I was in prison, and ye came unto me." (Matthew 26:35-36, from the one and only King James version). This is the road to salvation, so it is perhaps unsurprising that a wealthy patron might wish to have himself commemorated performing these acts, as appears to be the case in All Saints, North Street, where a benign, bearded elderly gent presides over every panel. 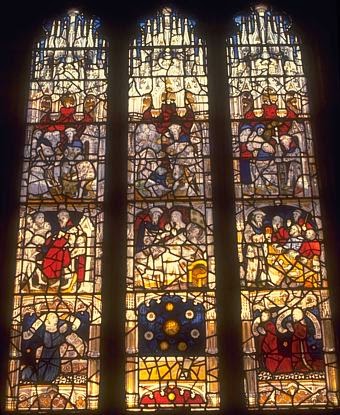 The acts of mercy are represented in the two central rows of panels. The bottom row contains images of kneeling donors and an image of the sun and planets, which may or may not actually belong here. 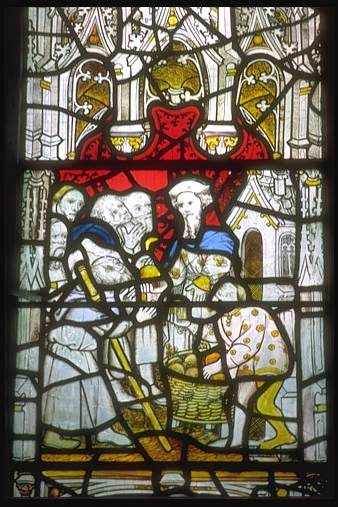 To feed the hungry, the virtuous man doles out loaves of bread to beggars with the help of a faithful servant.

To give drink to the thirsty, he pours liquid from jugs into bowls with the aid of the same wee servant. Note that the figure in front is walking on padded knees with little stools under his hands; one of the desperately needy. 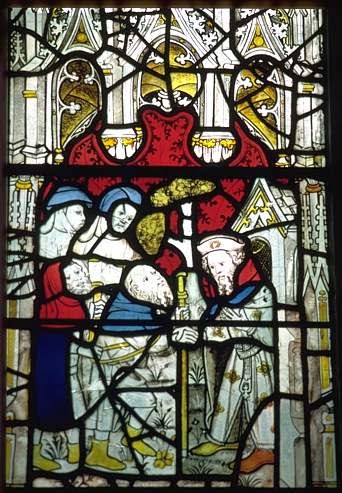 He takes in the stranger by welcoming a couple of travellers with walking staffs into his home. I'm not too sure whether that is supposed to represent a cockle shell on his hat, indicating that he too has been a pilgrim to Santiago de Compostella. I may be over-reading it here. 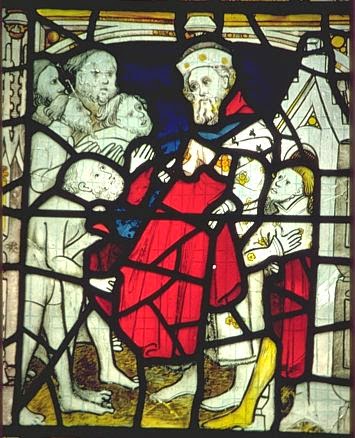 He clothes the naked with some spiffy red garments, once again with the help of the faithful servant. Medieval guys wore boxer shorts evidently. 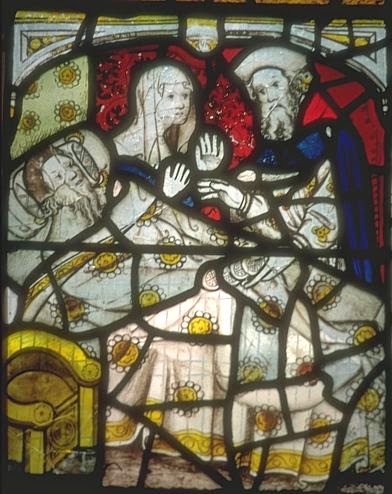 He visits a sick man, bringing some sort of gift - might be money, or bread, or home baked goodies. Probably money, I think. The wife of the sick man seems quite overcome. Note the commode by the bed. The 15th century glaziers of York were quite partial to this as a symbol of illness or impending death. 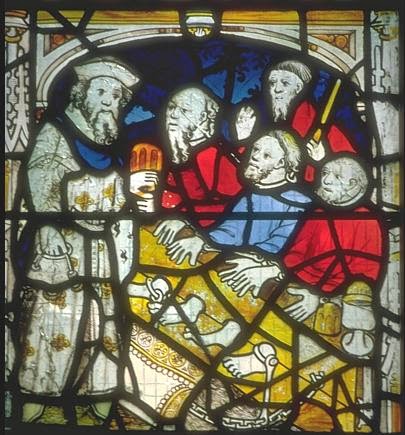 Finally he visits the prisoners, not in some dungeon vile, but in the town stocks. Best of all, he has brought a large purse into which he is dipping his fingers. Presumably he has payed their fines. Perhaps it is easier to be virtuous if you are rich.

The wall paintings in Pickering church are faded and less vividly coloured, not to mention difficult to photograph as you are firing into the clerestorey windows. They are also enthusiastically restored, but the scheme is still there. This church contains an array of paintings of some of the most popular motifs in late medieval art, but we will look at this one for now. 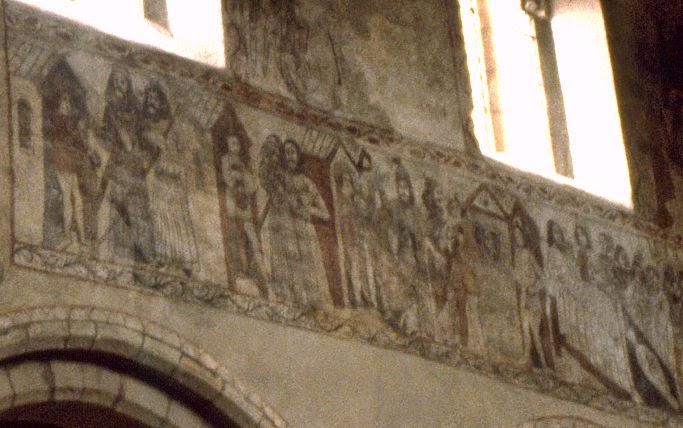 The individual panels slightly overlap one another, giving the look of a continuous scene. 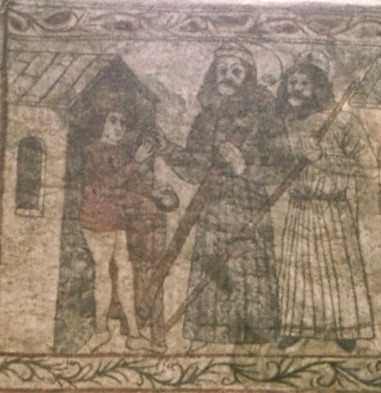 In this sequence a beardless young dandy dispenses the goods, in this case loaves of bread to a couple of long haired wayfaring strangers who look alarmingly like George Harrison and John Lennon from the late 1960s. This seems to combine feeding the hungry with taking in the strangers. 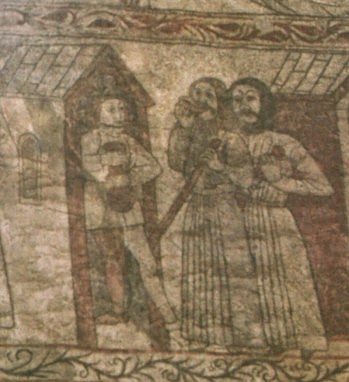 These same two enjoy a quaff from a bowl which has been dispensed from a jug. 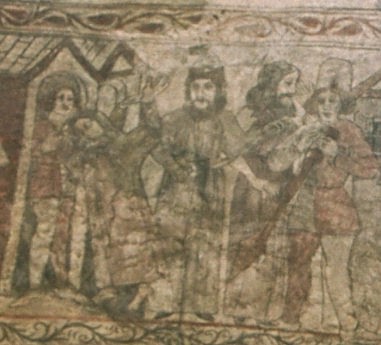 The young man has also dispensed a garment which seems to be a bit difficult to get into, as the wayfarers proceed on their journey. If you are wondering, as I was, why a large spear might be considered a merciful thing to give the needy, I think the figures on the right actually belong to the next scene, as follows. 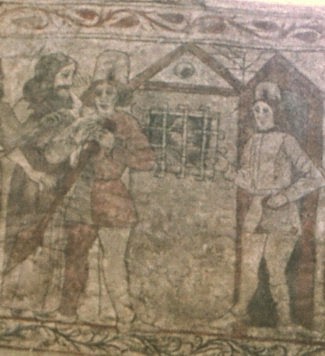 The benefactor is visiting a prisoner in a cell. As he is holding a large purse, I presume he has bribed the jailer to lower his weapon. The grateful fed, watered and clothed hippies seem to have come along to help, or perhaps they are just wayfaring on. 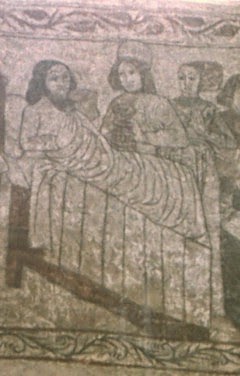 Here he visits the sick bearing some sort of gift, again with a somewhat overwrought wife in the background. 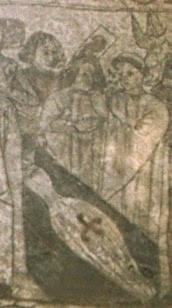 The final panel represents the burial of the dead. This is not mentioned in Matthew, but it makes up that favourite number seven, and is undoubtedly a merciful act, at least for the survivors.
So what does this all have to do with Medieval Writing? Well it does show that texts can be represented in pictures, and were. I don't think it necessarily implies that the readers were illiterate, but just that the teaching and preaching tradition contained written, pictorial and oral elements which added up to a total experience in the church, which was undoubtedly a more colourful and exciting environment than any other in the lives of most parishioners. It also encouraged the worshippers to pray for the souls of the patrons and donors represented there, in the same way that medieval tombs did. That's a story for another day.
I don't think I know of this pictorial program in a medieval manuscript, but they are probably out there somewhere. If you know of one, please tweet it to @HipBookfairy.
Posted by Dianne at 4:00 PM No comments: