I have been holding off writing this one because, whenever I have something to say on medieval women's fashion, I am assailed by medieval re-enactors who insist that every item of clothing or ornament has a correct name which must be used on every single occasion, and who then want to know the technicalities of how you get your headdress to stay that way. Well this is about the concept of women's fashion, how it is expressed on funerary monuments, and how it relates to the depiction of males during this period of competitive social stratification.
As mentioned in previous posts, the period in which effigy tombs became popular, for those that could afford them, was a period of rapid change in armour, and in the presentation of the fighting man. It was also a period of rapid change in women's fashion. Whether or not they always dressed to the nines, they were certainly depicted in the very latest on their tomb monuments. 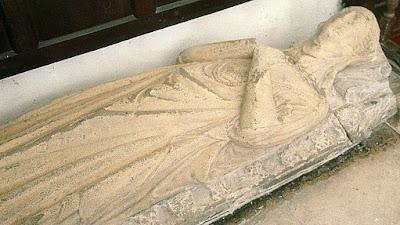 The earliest female monuments of the 13th to early 14th centuries, such as the one above from Appleton-le-Street church in Yorkshire, show a standardised form of female clothing. The drapery of the dress is swirly and enveloping, but can reveal the curves of the body in a sculptural way. The headdress is simple and includes a wimple which covers the neck. It is a very sculptural form, like the crosslegged knights who so often accompany these ladies. This is emphasised by the fact that any surface treatment with gesso and paint has usually disappeared under the influence of time, weather and church restorers. 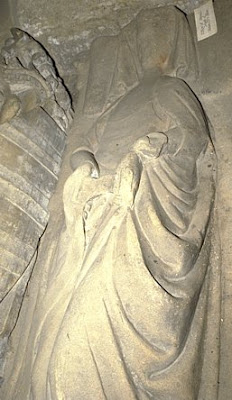 This lady from Bedale in North Yorkshire is another example of this style, with a very billowy style of drapery that seems to be there for its three dimensional effect rather than the meticulous depiction of a particular style of frock. (OK medieval re-enactors, I know they didn't call them frocks. It's a generic word.)
Around the middle of the 14th century, ladies' fashion suddenly happened. It could be argued (OK, OK, I am arguing) that increasing social mobility caused by the many disasters and accidents of the 14th century became expressed in competitive dressing, as well as eating, entertaining, posh book ownership and prancing around in the latest military equipment, not to mention building fancier houses. Interestingly, one chronicler blamed it all on an influx of Belgians to the court of Edward III and his queen Philippa of Hainault. The above is from a text of the Brut Chronicle (British Library add. ms. 33242, f.140-141) and is the first part of a rant about wicked modern fashion which reads as follows:

or in modern English

In this time Englishmen so much adhered to the madness and folly of the foreigners, that from the time of the coming of the Hainaulters 18 years before, they ordained and changed every year diverse shapes and disguisings of clothing. They were of long, large and broad clothes destitute, and desert from all old honest and good usage. At any time they wore short and narrow clothes, jagged and cut on every side to flatter (flatten?), and buttoned, with the sleeves and tippets of their surcoats and hoods over long and large and hanging down over much, so that in truth it could be said they were like tormentors or devils in their clothing and adornment and other array rather than men. The women more nicely yet passed the men in array and curious appearance, for they were so scantily clothed that they let hang fox tails sewn inside their clothes to hill (enhance?) and hide their arses. This disguising and pride perhaps afterward brought forth and caused many mishaps and mischiefs in the realm of England.

You can look at this in detail on the Medieval Writing website here.

I don't know about the mishaps and mischiefs, but fashion certainly became a thing. The foolishnesses of male fashion as derided above were not so often to be found in 14th century effigy tombs, as grand tombs were mainly the preserve of the knightly classes, who preferred to be depicted in the latest suit of armour. Certainly not much mischief to be got up to in one of those.

This tiny little male civilian figure from a brass, possibly from the head of a floriated cross, from Hampsthwaite in Yorkshire shows the disgraceful male attire; very short garment with lots of leg showing, extraneous flappy bits and a gross excess of buttons. Obviously decadent. Such attire is much depicted in illuminated manuscripts from this period, from which it can be seen that really stupid shoes and bizarre hats go with the look as well. 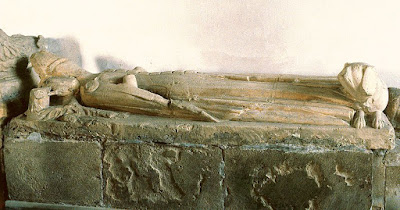 This is a battered example from West Tanfield in Yorkshire, but it shows how ladies' fashions became more revealing. The wimple disappeared, exposing the neck. Great holes were cut in the sides of the outer garment, revealing the undies. The outer garment was cut closer to the body, revealing more of the shape beneath. And there were off the shoulder capes, extraneous flappy bits on sleeves and dozen of buttons along tight fitting sleeves and down the front of dresses. There is no evidence from tombs to confirm or deny that they wore fox tails under their skirts to make their bums look bigger. 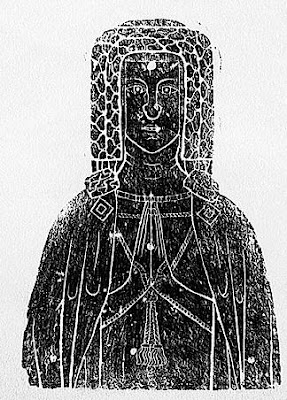 Headdresses became diverse and elaborate, as with this frilly number on the brass of a lady from Bothamsall in Nottinghamshire. This also shows the rows of buttons on the sleeves. You are obviously a person who does not have to fill up their day with menial tasks if it takes you, or your servant, half the morning to do up your sleeve buttons. 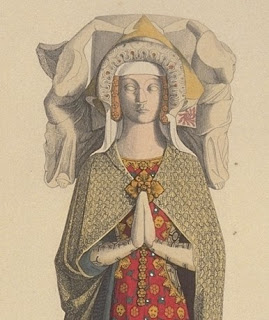 Most tombs lack the surface treatment of gesso and paint these days, but surviving examples and battered relics show that texture and colour were used to depict the intricacies of complex and expensive imported fabrics making up the ladies' garments. The tomb of Lady Elizabeth Montague (d.1354) in St Frideswide's cathedral, Oxford gives a hint at how lavishly these effigies, and their clothing, could be depicted. The illustrations above is from C.A. Stothard 1840 The Monumental Effigies of Great Britain: London. 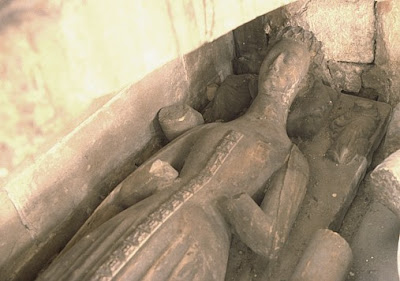 This rubbing of a brass of Lady Agnes Routh from Routh in Yorkshire shows the extravagant styling of the early 15th century, with a highwaisted style and huge billowing sleeves deploying acres of fabric and an elaborately constructed headdress. Her cuffs and collar are blank as they once contained some sort of inlay, probably representing fur. This is a lady from a tiny nondescript village in East Yorkshire, but she is presented as the height of glamour. I suspect that the emphasis on rapidly changing fashion is a reflection of the social conditions of the times, repudiating ancient lineage as the doorway to privilege and emphasising displays of current wealth as the signifiers of status. 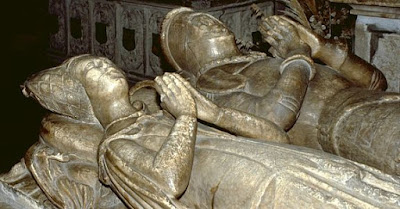 As with the knights, the increasing use of alabaster for high status tombs in the 15th century allowed for intricate depictions of fine surface detail, showing the minutiae of hair ornament, jewellery and fastenings. Even when they have lost all their colour there is much detail to explore. The above example is from Ashbourne in Derbyshire. 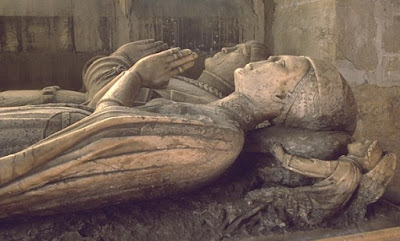 And here is a beautiful later 15th century lady from Methley in Yorkshire wearing a tall, almost turban-like headdress with the fabric texture depicted, because you just can't have too many alabasters. She is sporting plenty of bling with her rings and necklace. 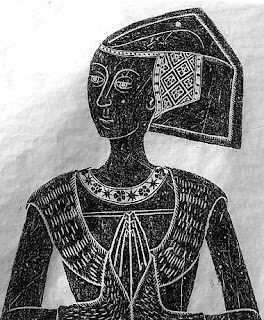 The headgear just got more extravagant, as in this late 15th century brass at Raveningham in Norfolk. Note the fur collar and the nifty furry fingerless mittens. She wears the Yorkist suns and roses collar as her husband was squire to King Richard III. Some brasses showed an attempt to depict fancy brocaded fabrics, but the effect is a bit cruder than on the three dimensional tombs. 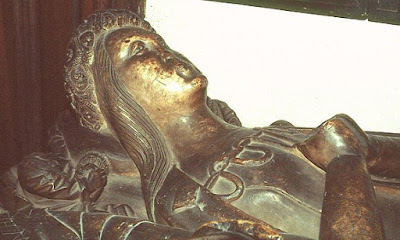 Sometimes a lady's hair was depicted flowing down freely over her shoulders. It used to be said that this signified that they had died unmarried, but there are several examples where they are depicted this way lying next to their husbands, as in this late 15th century tomb from Batley in Yorkshire. Perhaps it is a way of suggesting that age is removed in the liminal stage of death. Certainly nobody, apart from the odd royal personage, seems to ever get depicted on their tomb as old. Once again the depiction of richly brocaded fabric on the lady's headgear is emphasised. 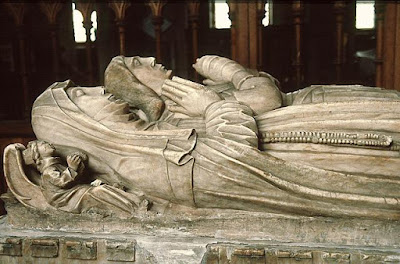 The exception to following the rapidly changing vagaries of fashion were if the woman was depicted as a widow. In that case the imaging reverts to a rather shapeless garment, veil and wimple or pleated barbe covering the neck. It was the same for centuries. This example from Harewood in Yorkshire has the lady prominently displaying her rosary beads. Widowhood was a virtuous, if perilous, state. 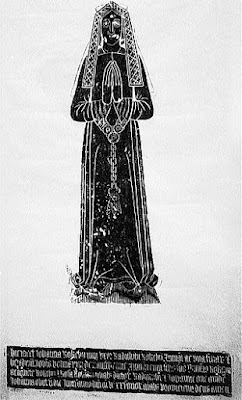 The fashion parade continued into the 16th century, with perhaps more emphasis on opulence rather than extravagances of style. This lady of the early 16th century from Bishop Burton in Yorkshire has furred cuffs and a very large and conspicuous girdle and chain. The headgear seems to have been the most telling item of fashion change. 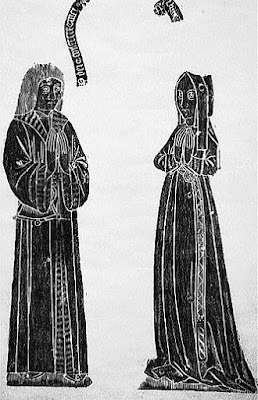 The smaller and more modest brasses of the somewhat less exalted levels of society in this era became more stereotyped. The ladies wore the latest styles, but were not so ingeniously individualised. I guess they were just more ready-to-wear kinds of monuments. It is notable that male fashion had become notably more modest than the frivolities of the late 14th and early 15th centuries. A demure long gown was fine so long as it had lots of fur and you were sporting a large purse. The above example is from Tideswell in Derbyshire. 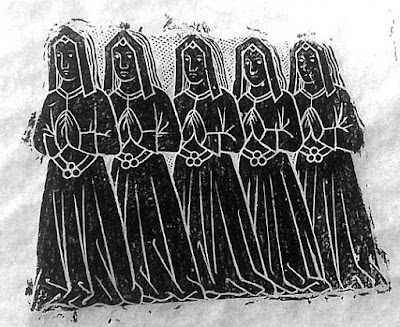 This group of women are subsidiary figures in a  large and elaborate brass arrangement on a table tomb in Chesterfield, Derbyshire. The main figures on the brass are wearing very complex heraldic attire, as illustrated in a previous post. These represent the female children of the deceased, and they are as alike as peas in a pod, wearing identical clothes. They are symbols of a time and place and set of relationships, but even their clothes don't distinguish them as individuals.
For those interested in medieval fashion, tombs can provide endless hours of fascination. However, it is worth pondering what they represent. Just as the faces of the deceased are not portraits but idealised imagery, so the clothing is not so much representative of the wearer's individuality as defining a position in society. Manuscript illuminations as well as tombs depict aristocratic women as permanenty dressed for a night out with John of Gaunt and his pals. We don't know what they looked like when hanging around in their dressing gowns, or whether they had dressing gowns. Did they have lazy days in their private chambers wearing a floppy shift with their hair hanging loose?
And no, I don't know how they kept those fancy headdresses in place.
Posted by Dianne at 5:52 PM

Great post. Thanks for all the imagery. Awesome to see so many to compare.