This ongoing series is threatening to ramble all over the place, but hopefully I will eventually be able to round up all the trailing threads and make it into a coherent argument about the changing nature of medieval funerary commemoration and the significance of what has happened to the tombs. Meanwhile, back to the primary evidence.
Three dimensional effigy tombs are highly visible in churches because they are large, often were in elaborate settings, and were once brightly coloured and gilded. You couldn't miss them. Brasses are flat and can be less conspicuous, although some were also in elaborate settings, but others were of modest size. The ability to reproduce them by brass rubbing has made them well known and much reproduced in publications. While essentially monochrome, they could have some colourful details in the form of inlay, for example in heraldic shields or details on clothing.

Lady Agnes Routh resides with her knightly husband under a double canopy in the tiny village of Routh in East Yorkshire. She is exquisitely attired in the latest fashions of the early 15th century in clothing and hairdo. Fashions were getting a wee bit extravagant by this time. The collar and cuffs of her gown are blank because they once contained some sort of inlay. In reference to previous discussions, her sleeves hang down as if she is vertical and her eyes are open, but she is lying flat on the floor. Yes, she is in a liminal state, preserved that way in a memorial which is both grand and longlasting, brass being durable stuff so long as nobody rips it up to make cannons or the like. We will get back to that as well.
Perhaps less well known, as less conspicuous and more prone to destruction, are the grave covers which are incised with designs. These could include life sized effigies with very similar designs to those of brasses. 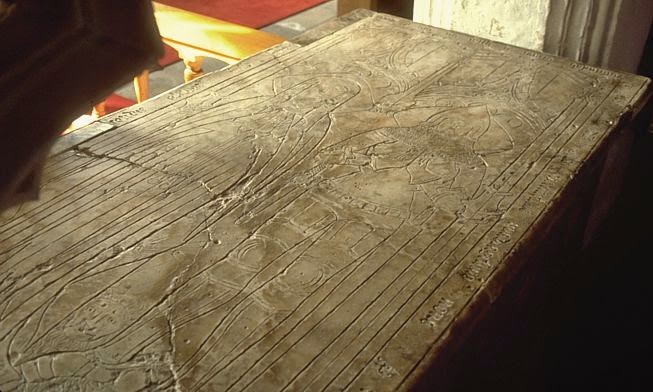 This 15th century slab in Harpham church, East Yorkshire, depicts a knight and lady under canopies with a marginal inscription around the edge in a very similar manner to a brass. It is also sitting on a table tomb under a canopy, so it is quite a conspicuous arrangement. In many cases these were on the floor and have become quite worn, and sometimes they have been moved and redeployed. 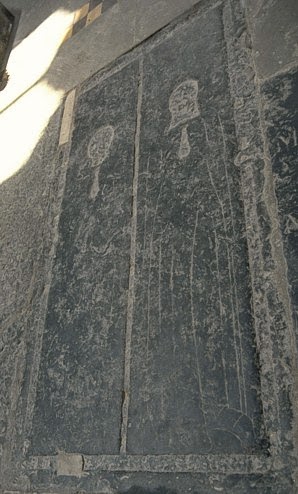 This effigial slab in Boston, Lincolnshire shows a man in civilian dress and a woman. It is set into the floor. The faces, praying hands and marginal inscription are missing as they were obviously inlaid in another material, presumably brass. Once again hold the thought that this man is not a knight and the tomb slab, while having many standard elements, is not a standard shopwork variety, at least not for England.
Far more common, and less regarded, are slabs which bear non-effigial motifs, of which the most common is probably that known as a floriated cross. These are also found on some brasses. They can be difficult to date as they don't have the intricate datable details like armour and fashion. They also seem to have been moved around a lot, perhaps used for repairs to stonework, and sometimes end up in peculiar places in the church.

The floriated cross slab shown here lies in the floor of Eastrington church in East Yorkshire, overlooked because of the more conspicuous alabaster effigy tombs there. It has had the indignity of having holes bored through it for the installation of heating pipes. Like most slabs of this type, it has no inscription, so perhaps over the centuries there is less sense of this being something that pertains to the identity of an individual. The significata of liminality are not displayed although, in its day, it would still have had the function of reminding the congregation to pray for the soul of the deceased.

In a slightly unusual example from Amotherby, North Yorkshire, a floriated cross slab has an inscription which reads "ICI GIT WILLIAM DE BOR(D)ESDEN PRIZ PUR LA ALME", which is significant because it is in Norman French, implying that it is aristocratic, and also because it specifically requests prayers for the soul, at least from the literate among the congregation. This slab was found in the churchyard in 1871. 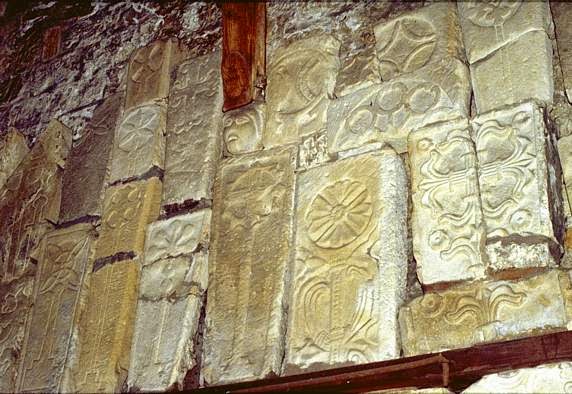 In Bakewell church, Derbyshire, great numbers of these types of monument had been stacked up against a wall in the south porch, redeployed and decontexted. Makes you wonder how many of these have been removed, destroyed or re-used in other places. When a devastating fire destroyed the interior of Brancepeth church in county Durham, large numbers of these types of tombstones were discovered hidden in the walls. Here is a newspaper article about it. These slabs also included another type of motif; the use of a tool of trade to indicate the profession of the deceased individual rather than an individual identifier. One explanation for this is that stone grave slabs were being deployed further down the social scale for those who could not afford the grander style of effigy memorial, and even if they could it might not have been tolerated in a still rigidly stratified society. 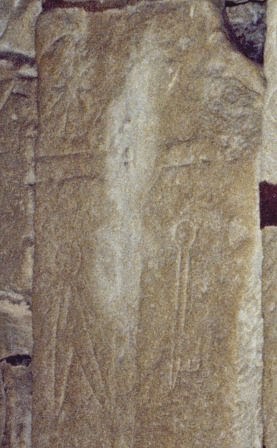 One of the slabs from Bakewell, for example, displays shears and a key beside the cross motif.
The imagery of these non-effigial tombs has some degree of standardisation, but also some variability. Possibly they were local productions which did not conform so strictly to the stereotypes of the grand shopwork tombs. The further you were up the social tree, the more stringent were the rules as to how you could depict yourself. 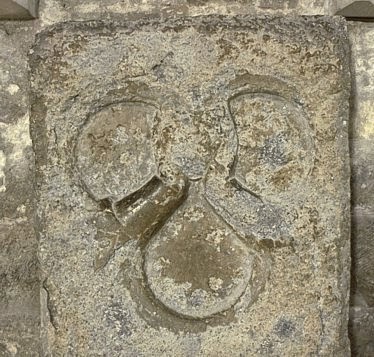 The procedure of removing the heart from the body of someone who had died away from their home  and bringing it back for burial is known; or alternately removing the innards and burying them somewhere while carting the exterior of the carcasse back to a home church. Slabs like the one above from Chichester cathedral, depicting two hands holding a heart, are often taken to be memorials to a heart burial. Alternatively, full sized effigy tombs are found with the figure holding a heart. Holding a heart could have some reference to purity of heart. It can be hard to be sure what is meant to be literal and what metaphorical in these depictions.
So I guess the point is that there were various modes of memorialising the dead. They were all for the purpose of helping the departed over the threshold, through purgatory and to their final reward. Some also displayed strong messages about social status, not all of which were related to feudalism. More on that later. The ways that these tombs have been treated over time is a bit more complex than the oft announced view that they were unacceptable at the Reformation and were therefore deliberately damaged or destroyed. There are questions about just what these tombs were for in the first place.
In the next episode I will look at the chronology and social spectrum of tomb commemoration and perhaps launch into something about funerals.
And what does this all have to do with medieval writing? Well, there is more to imparting messages than just scratching black marks on paper, but the creators of the black marks controlled the rules of the game and the nature of the communication.
Posted by Dianne at 6:11 PM