Having pottered my way through cleaning up and organising my photographs of stained glass windows in parish churches in England, a subset of my huge project to continue the process of turning a load of old decomposing Kodachrome and Ektachrome into an orderly digital archive on Flickr (why, oh why, did I think this was such a good idea?), I discover that two churches in York have windows that depict the Nine Orders of Angels. This concept, also referred to as the Celestial Hierarchy, was expounded by Pseudo-Dionysius the Areopagite somewhere around the 5th century AD or beyond. He has been dubbed Pseudo, not because he didn't exist or was some kind of fraudster, but because he wasn't the Dionysius the Areopagite mentioned in Acts 17 who was converted by St Paul. It was just his nom de plume. I have always thought this was a good name to drop unexpectedly into a dinner table conversation.
The churches containing windows with this program are the fabulous All Saints, North Street, where the heavily restored window was reassembled from fragments after the discovery of an antiquarian drawing that showed how it was supposed to go, and St Michael Spurriergate. 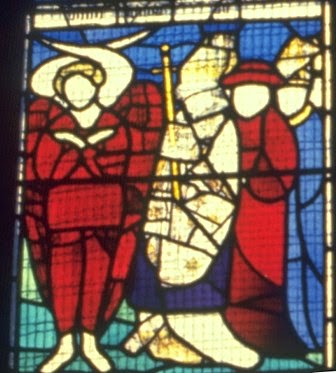 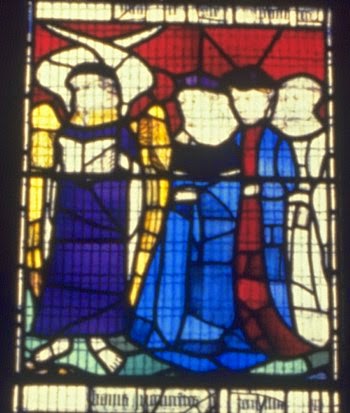 From All Saints North Street, a Seraphim in scarlet leads a procession of senior ecclesiastics while a Cherubim leads a group of cleric and scholars. The plain coloured glass represents where modern glass has been inserted to fill out the general design. The grid pattern is from the mesh screen behind the window, inserted to prevent kamikaze birds or rocks thrown by idiots from damaging the windows.

Working down the hierarchy, from St Michael Spurriergate, Thrones or angels of humility and Dominations, dressed as armed knights to display their qualities of leadership. 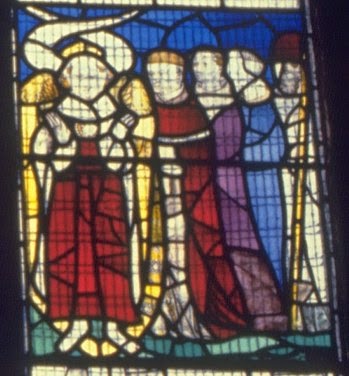 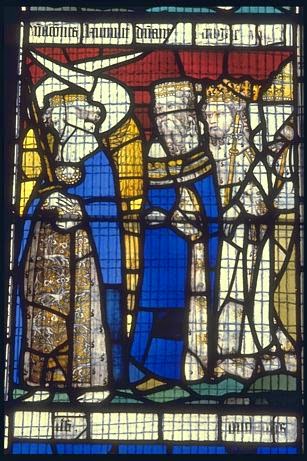 From All Saints North Street, a Throne leads a group of members of the legal profession, while a Domination leads a group containing a pope, a king and an emperor. This panel has rather a lot of the lovely and intricate original glass in it. The angels are being matched with the mortal folks in their hierarchy.

Back in St Michael Spurriergate, the next panels should be Virtues, allied with nature, and Powers, depicted as armed warriors. Well that is the theory. I think these may have got a bit out of order over the centuries. The ones on the left are wearing armour, and crowns. It seems our Dominations, Powers and Virtues may have got a bit mixed up. Story of the history of nations really. 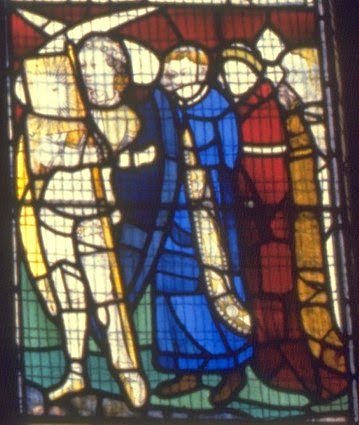 Back in All Saints North Street, a Virtue leads the city burgesses while a Power leads a procession of priests. Ponder on that association.

The final panels in St Michael Spurriergate show Archangels and Principalities. I had always thought that Archangels were at the top of the heap, but it's a bit more complicated. Archangels can be the leading or senior angels of each group, but as a whole they are in the lower orders. They are also the messengers from God to humanity. Think Archangel Gabriel, Annunciation. Principalities seem to be a somewhat subversive group and I don't quite understand them. 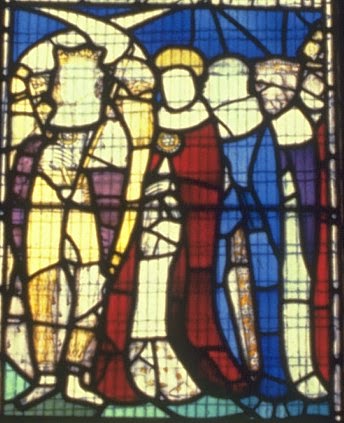 In all Saints North Street an Archangel leads a group of ordinary city folks, including a worker with a shovel, while a Principality leads a group of noblemen.
The sequence at St Michael Spurriergate ends here, as there are in fact only eight panels in that window. 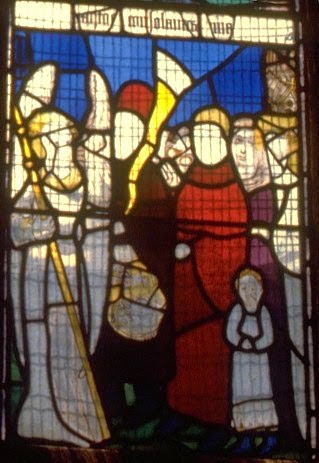 In All Saints North Street the final panel shows an assortment of townspeople being led by ..... an Angel. Yes, the lowest order of angels are called Angels. The people who hang out with Angels include a child and, if you look very carefully in the middle of the panel, next to the men in red, a person wearing spectacles.
The whole thing is so appealing because of its ever so medieval tangled threads of iconography, text, tradition and social reinterpretation. An earnest early Christian scholar writes a dense and complex treatise under the pseudonym of a New Testament figure, which is translated in that literalising medieval way into pictures of angels in feathery tights or suits of armour or flapping their wings amid sheets of flame, then overlaid with some kind of commentary on the nature of the earthly hierarchy.
Lessons for the illiterate?  Maybe just a reminder that God orders the estates in both heaven and earth.

These pictures appear in larger format on my Flickr site, but they are not properly organised yet. They will be. One day.
Posted by Dianne at 6:27 PM