What's With Medieval Tombs? - Part 9 The Process of Death

Recent events involving the reburial of Richard III have revived discussion of the handling of medieval bodies. The process was compared by some to the translation of a saint's relics, but it wasn't necessary for the mortal remains to be those of a saint for such processes to take place within the medieval period. Even the fossicking around with his bones beforehand would not have been unusual, or even distasteful, in the medieval era.
But first, an unusual diversion. Many years ago I undertook postgraduate research work in the area of archaeology and historical anthropology on societies in the islands of Southeast Asia, most notably Borneo. A great deal of this revolved around mortuary practices. Many traditional societies that were not Islamic or Christian practised what has been termed secondary burial, in which immediately after death the body of the deceased was stored temporarily in a coffin or other receptacle, sometimes even in the house or on a verandah. This situation could last for a long time, months or even years, until the corpse was defleshed and perhaps more importantly, resources collected together for a second funeral, the major event of the process. The bones were cleaned amid much ceremonial and placed in a new receptacle, which itself was placed in some kind of cemetery arrangement. These were very varied between ethnic groups. 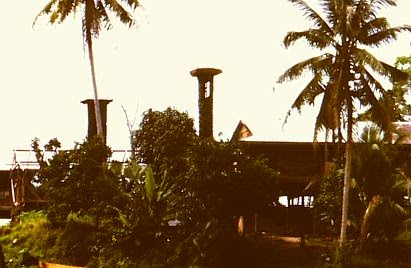 The poles with little flat roofs beside a Punan Bah longhouse on the Rejang River in Sarawak once held jars containing the secondarily treated bones of senior members of the community. They were formerly in the jungle, but the poles have been relocated to the village. 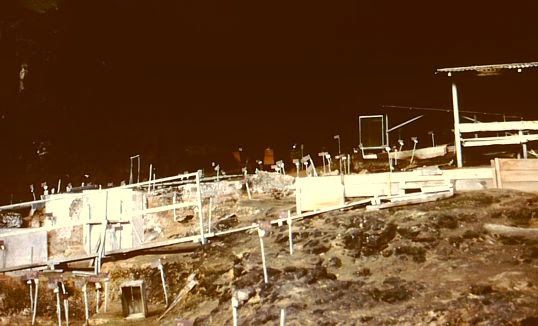 Such practices were also carried out in prehistoric antiquity, as discovered by archaeological excavation. The cemetery above is in the mouth of Niah Cave in Sarawak and contained a range of burials of different types, including secondary burials. 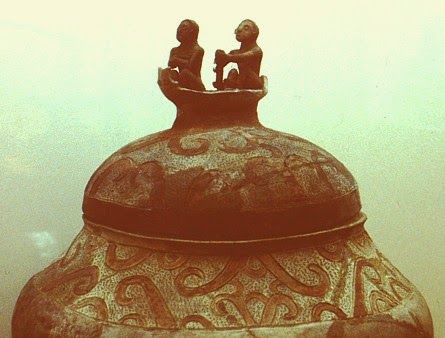 This is a beautiful secondary burial jar from Palawan Island in the Philippines, from the National Museum in Manila, with the dead person being ferried by a boatman on the lid. These practices refer to death as a process, not an event. There is an extended stage of liminality.
Colonial officials and Christian missionaries attempted, eventually successfully, to stamp out these practices, the actual messing about with bodies and bones being replaced with purely ceremonial activities. Arguments against the practice were that it was unhygienic, possibly justified. Christian missionaries also argued that such practices were at odds with Christian practice, in which the body should be disposed of rapidly and definitively; clean and final. They didn't know their history. This was not necessarily the case in the Middle Ages.
Just getting the body to the funeral could be a protracted affair, depending on the social status of the deceased. The more significant the departed had been in life, the more preparations were required for the funerary festivities. The body was laid out in a public part of the house, surrounded by candles, and watched and prayed for for several days. If it was going to be a long stint, there were various means to prolong the preservation of the corpse. 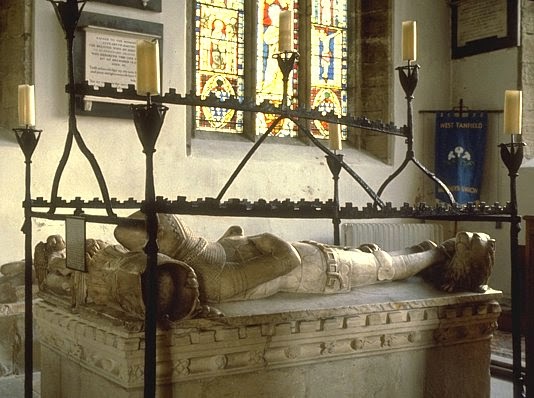 This alabaster tomb in West Tanfield church, North Yorkshire, to Sir John Marmion (d.1387) and wife Elizabeth (d.1400), is enclosed by a metal hearse with prickets for candles. This was the arrangement that was used for laying out the body, and it is tempting to see some continuity with the process of watching the body before burial, and the watching of the tomb, extending the liminal aspects of the death process. There is just one problem. I think this is the only example known of an actual tomb with these accoutrements. Whether this is because the metal hearse would normally be removed after an appropriate time, or whether the Marmion family were funerary innovators, I guess we never will know.

A correction and addendum is due here. The tomb of Robert, Duke of Normandy (d.1134) in Gloucester Cathedral, has a metal hearse. The tomb has a wooden effigy of a crosslegged knight and may have been constructed in the 13th century. There is supposedly one other example in the country. 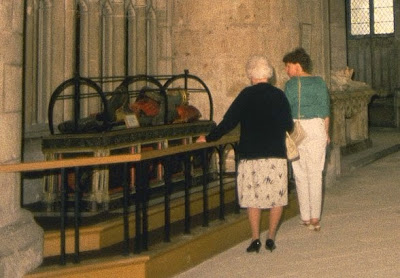 Now we get to some medieval mythbusting. It is sometimes asserted that medieval people had no accurate knowledge of anatomy as the church forbade dissections. Well, this just is not true. They had few qualms about reorganising the remains of the dead, whether recently deceased or long departed. If a person of some significance died a long way from home, internal organs might be removed, either so that the body could be transported with less risk of nasty accident, or to bury the body but send some component, usually the heart, back to its home. We have already mentioned, in the blog posting on royal tombs, the burial of Queen Eleanor of Castille's bowels with due ceremony in Lincoln Cathedral and the erection of a series of crosses at the place where her funeral cortege stopped on the way back to London. The battered fragment above is the only relic of the Eleanor Cross in Lincoln. Her effigy in the cathedral is a modern facsimile based on the one on her tomb in Westminster Abbey. 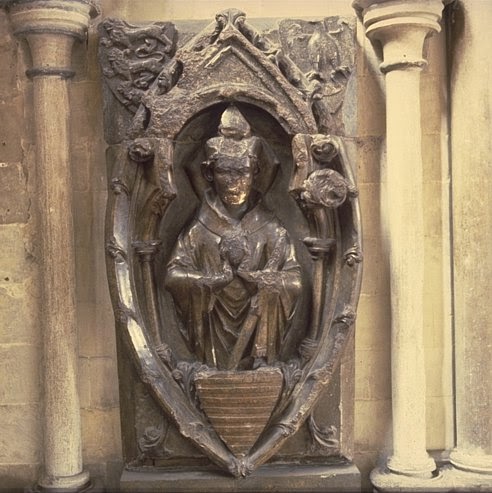 This small Purbeck marble wall monument with a half effigy holding a heart may represent a heart burial. It resides in Winchester Cathedral. 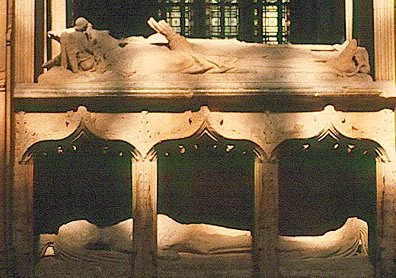 The accuracy with which they depicted the process of decomposition on transi or cadaver tombs shows that people of that time were not unfamiliar with went on with bodies after death. The above example is from Lincoln Cathedral and represents Bishop Fleming (d.1431). There are other examples in a previous posting on these kinds of tombs.
For people from the upper echelons of society, for whom an elaborate tomb was to be made, there was sometimes a need to place them in a temporary repository while the tomb was completed. The bones, or whatever was left, would be moved at the appropriate time, one assumes in a coffin or container. While bodies and tombs were significant things in themselves, it was not necessary for the procedure to be rapid and definitive.
The cult of saints' relics also indicates that it was not necessary for the body to be complete and orderly. I have myself seen the head of John the Baptist, or at least one of them, in the cathedral of Amiens. Bits of saints ended up all over the place. The same lack of necessity for articulation and order can apply to significant secular bones. 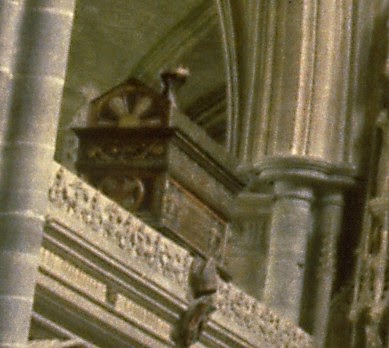 In Winchester cathedral there is a set of unusual boxes, of Tudor date, which, when I took this photograph in 1979, were perched on top of screens in the choir. They contain the bones of Anglo-Saxon and Danish kings of England, as well as three bishops. These significant individuals were buried with all due ceremony in front of the altar of the Old Minster. In pre-Conquest days that church was demolished to make way for the New Minster, but they were not given new individual tombs in the new cathedral. The chests are currently sitting in the Lady Chapel. As they have had some misadventures over the centuries, the bones are jumbled and scientific studies will be undertaken to see what can be untangled. You can read about if briefly here.
It is noteworthy that other English monarchs whose places of interment were destroyed over their heads at the Reformation were not exhumed and reburied and equipped with a new monument: Stephen, Henry I, Richard III. Even at the highest levels of society, a monument was not forever. It was part of the process of death. 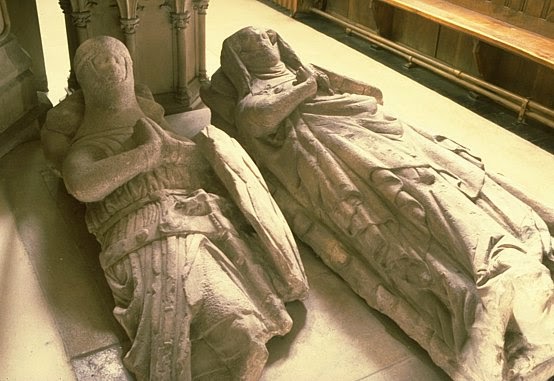 While some tombs were removed to safer havens from monasteries that were destroyed at the Reformation, many, probably most, were not. These two plonked on the floor of Hornsea church in East Yorkshire came originally from Nunkeeling Priory. Somebody was presumably brave enough to reclaim their own, but perhaps to some others the tombs of their ancestors had already served their purpose.
For ordinary folks who were buried in unmarked graves in the churchyard, eternal rest in one spot would have been an even more dubious proposition. I once chatted with a vicar of a church with a very small churchyard of Anglo-Saxon origin. On my enquiring as to how full it was, he smiled benignly and said when they dug a new grave they often found evidence of previous occupancy, but just moved things over respectfully to make room. It must have happened all the time. When there was a bit of a tidy up, bones might be collected together and placed in ossuaries. These are not evidence of plague or disaster, just overcrowding or the need to build a new extension to the church.
I have a feeling that something similar may have happened with the tombs themselves. When the latest important corpse was required to be buried in the most conspicuous spot in the chancel, then the previous incumbent might be moved. Tomb effigies are often found under arches or on chests where they don't really fit, or they are sitting on the floor in a corner. Some of this may be due to modern church renovations, but this may be only one of the agents of chaos. Effigies have been dug up from churchyards and grave slabs have been re-used in walls or floors. 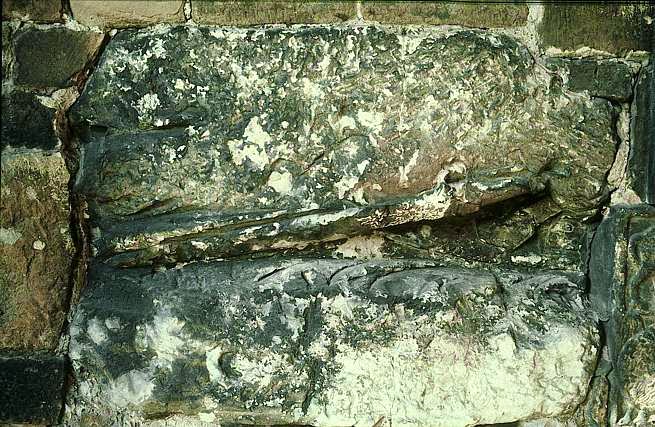 This piece of walling in the church at Eastrington in East Yorkshire has been made by roughly squaring off a couple of effigies.

Some give the impression that they might have spent a few centuries left out in the rain, like this washed, worn and broken crosslegged knight from the church at Routh in East Yorkshire. I must say he rather gave me the creeps while I was rubbing a very handsome brass nearby, especially as it was a remote sort of church with a tendency to creak, but I guess somebody must have brought him in at some stage because he looked swashbuckling and romantic. His current state is a million miles from how he would have looked in the time when he was part of the process of death. The ceremonial of death had a series of time frames, and none of them encompassed eternity.
Posted by Dianne at 6:29 PM

The third surviving medieval "hearse" or metal framework over a tomb is the tomb of Richard Beauchamp, 13th Earl of Warwick, in the Beauchamp Chapel of the Collegiate Church of St. Mary in Warwick. The earl died in 1439, and the foundation of the shapel was laid in 1443. The effigy and hears are made of gilded latten, an alloy similar to bronze. According to the guidebook to the chapel, this is one only three surviving hearses, along with the two you have already named.
Esley Hamilton, St. Louis, USA

Thank you. fun to see this browsing after having a vision of a knight with folded hands on a tomb.

I've been trying to establish how holes down the sides of King John's effigy slab in Worcester Cathedral relate to a long-lost hearse. A CAD reconstruction by Matchstick Cathedral, on line, uses the Beauchamp example, but that's not right. We can't be sure, but it was probably more like the Gloucester one. John's and Robert's effigies are both of around the 1230s. As well as an apparent location for candles at West Tanfield and Warwick, hearses supported palls, possibly to protect effigies, though experts differ as to whether they were in place during commemorations, or at all other times. Marie de France's lai 'Yonec' refers to a silk pall over a tomb, not at a funeral (J. Martindale on the iconography of John's effigy's naked sword), with separate gold candlesticks around the tomb, their torches lit in commemoration.