In 1995 I found myself with  PhD in Archaeology and Anthropology and no academic job in prospect. Too old for a junior position, too inexperienced for a senior one, too overqualified for peripheral academic positions on offer, and too married for interviewing teams to believe that I would be willing to put in the hard yards to work in a different city to my husband. Yes, a (female) professor actually put the hard word on me about my domestic arrangements if I were to accept a job; illegal according to equal opportunity provisions but she sprung it on me over a "friendly" cup of coffee outside the interview room.
I put my newly acquired free time to use by investigating ways of using multimedia technology in teaching on behalf of the Family Medievalist, my longsuffering spouse who taught medieval history at the Australian National University. This has always been unpaid. At that time a number of academics at the ANU were trying similar experiments, but all in a disco-ordinated way and without support from higher echelons of the establishment. We held regular meetings in which we discovered we were all using different software, platforms, technologies and we all came from different disciplines. The science bods were amazed to find medievalists in their midst, as if they thought we could not personally progress beyond the quill pen.
In the late 1990s and early 2000s university management and senior academics alike were quite averse to this kind of activity. Some felt threatened that they would be required to do more work and acquire even more skills if this sort of thing got about. The university thought it ought to be able to make money out of such efforts, even those by an unpaid volunteer. Even archives thought we should have to pay for services that would otherwise be provided for free to any wandering member of the public, because we were obviously going to make a squillion out of it. Occasional meetings and conferences with other excitable cognoscenti punctuated periods of avoiding garlic and silver swords in the corridors from less enthusiastic members of the faculty.
As I have mentioned in previous postings on these projects, the whole thing fell to custard because of the rapid changes to technology. Without a team of experts updating things constantly, multimedia projects from this era just died of premature senility. Just one of my projects survived and grew, the website Medieval Writing. 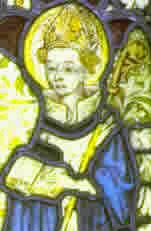 Medieval Writing was originally designed to teach paleography to students who hated the subject, much to the distress of the Family Medievalist who kept trying to persuade them that it was the key to discovering anything in medieval history. It ended up on the web, rather than a multimedia CD, because by giving it away for free I could keep control over it and develop it in my own way. It expanded to cover aspects of literacy and the nature of things that medieval people did and didn't write about. It has been rejigged technologically several times, but now seems to be coming to the term of its natural life yet again.
It is also galloping towards 300,000 clicks on the home page. Now that is over a long time, and some folks may keep coming back for return visits. Equally, many others don't go through the home page as they come in through Google searches or have bookmarked their favourite bit, like the index of scripts. It is not a strictly quantitative measure of anything I guess, but I can't help wondering how many copies I would have sold had I written a paleography book, or even how many people might have borrowed it from a library.
For that matter, what would my odds have been on getting a paleography book published in the first place, not being a member of the academic establishment? Certainly, publishing a book doesn't let you grow and develop a project over many years as a website does. There is no editor, but experts have written to me at times with suggestions and corrections, and they can be fixed instantly if needed. The biggest peer review group in the world is out there.
Strangely, some people just didn't believe it was real. On more than one occasion I have had a friend or colleague say something like, "I got a recommendation of your website from somebody in America. She found it on Google and asked if I knew you. I must look at it one day." or "I  saw your site listed on X university's link list. Amazing!" or "If you type 'paleography' into Google there's a site called Medieval Writing that comes out on top. That's not yours, is it?" There was a whole bunch of people in academia, not all of them old, that just didn't believe the digital thing was happening. The truly old academics just pined away and died when their copy typing secretaries retired and they had to type and file their own emails.
An interesting aspect is the feedback that a website allows. Yes, I have had emails from schoolkids wanting ideas for assignments and folks wanting me to identify the coat of arms on the antique set of spoons that they inherited from their greatgrandmother and deluded folks who thought they should inherit a country estate with an abbey on it because they have a document in their possession which belonged to Anne Boleyn's lady in waiting. I have also had some fascinating conversations from people who would never have gone near a paleography book; an international law professor working on digital signatures or a linguist investigating modern urban dialects.
This is proto-Digital Humanities, I guess, but the tools remained very primitive for a long time. The first manuscript facsimiles on the website were old black and white photographs, either out of copyright or used with permission. Yup, that is horrible to the point of totally unusable on a modern computer screen. 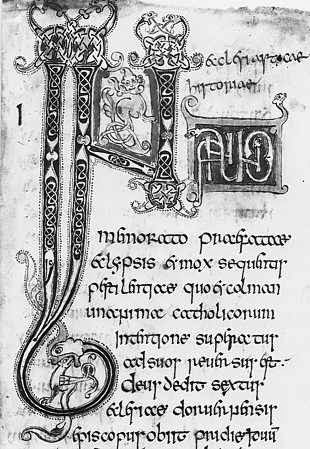 Rescanning helped, but the job got bigger and bigger as the site grew. Great thanks to the British Library for letting us have a go back then when things were so experimental. For legal documents, old Public Record Office scanned photocopies have been replaced by digital downloads from the National Archives. Now, of course, the number of high quality digital images of medieval manuscripts available on the web is enormous and growing, and so are the tools to make use of them.
There was very little on the web on paleography or manuscripts in general in the way back when, but now resources are proliferating. There are general introductions and specialist sites and tools for producing interactive transcripts far more sophisticated than the clunky little exercises that I devised for Medieval Writing. I'd ask if anybody needs a DHTML programmer in Dreamweaver for Internet Explorer 3 or a Flash 5 programmer, but I think I've forgotten how to do it.
There are communities of scholars interacting through social media and cross-fertilising ideas. This facilitates friendly conversations between people with new ideas, not overseen by a session chairperson with an overriding agenda and a tenured professorship. (Oops. Getting a bit radical here.) It all makes things hopeful that Digital Humanities can actually happen: that it can be an open door to all interested participants, not an elite privilege for high fee paying students in enrolled courses. (Yeah, yeah. Waves red rag and stands on the barricades, yelling.)
So here's to all 300,000 of you finger clickers who have helped carry the torch through the Dark Ages of Digital Humanities. And here's to the clever young folks who are going to take it to the high Gothic stage of beauty and functionality. If I can find a fountain of eternal youth (or at least eternal late middle age) I may be able to participate in it.
Ultimately, I think the moral to this story is that any subject, even one which students are reluctant to tackle, can be made fascinating with ingenuity. Before the age of the internet, which I believe is 25 this year, so much, much younger than me, resources for subjects like paleography were hidden away in obscure corners of academic libraries. Those resources are likely to be hidden even deeper in reserve collections and underground bunkers these days, but they can be translated into wonderful concepts accessible to all. Medieval marginalia of cats, killer bunnies, farting priests and nuns picking penises off trees may get their attention, but there is so much more that can engage people. We now have the resources and technology to do it.
Posted by Dianne at 5:31 PM

Quite a story Dianne.

Thank you for this post. As an academic returning to school after some time off (took a break between BA and MA/PhD), upon my return there was a brave new world to navigate where I was no longer an up and coming academic, but I wasn't exactly a newbie either. I think I have done well enough for myself while still learning the ropes, but every once in a while it is nice to know that not everyone just hopped on the train to success at 19.

Also, I love your blogs. And your paleography blog was one of the most useful things I had when no one was really teaching it on this side of the US, but I wanted/needed to learn it for research purposes/personal interest. I was definitely not one of those students who hated paleography.... that was my specialty and passion. And your site was my goto in my hours of need.

Alright, done ranting, and a final thank you!

I laughed and laughed! Blimey I sympathise. I'm trying to convince people I can talk/write intelligently about odd topics, even manuscripts, in an interesting way...well for them that's clearly not possible. Though I do wonder why they even worry...at senior's residences half of them fall asleep and the other half just like the pictures. Am wondering if I could become the first singing dancing accompaniment to a slideshow? Remember "Brush up your shakespeare". Oh dear.