This episode of the medieval tombs series will look at the effigy tombs of clerics. Those of the highest ranking churchmen are some of the earliest to be found, and show right from the start some of the distinctive iconographic conventions of effigial tombs.

This effigy of Abbot Benedict of Peterborough (d.1193) was illustrated in the first blog posting of this series. The figure is somewhat low relief, but that may be a function of the thickness of the slab of Purbeck marble from which he was sculpted. He represents certain conventions that were already in place and persisted with clerical effigies. He wears his mass vestments accurately detailed. The precision of depiction of vestments, whether mass or processional, is as meticulous as the depiction of the latest fashions in armour on knightly tombs. Various grades of clergy had their symbols of status as well as priestly office. He is not wearing a mitre, as abbots were usually portrayed later, but he carries his crosier, which is broken. He is trampling a dragon or serpent and choking it with the end of his crosier.

The Purbeck marble tomb of Bishop Hugh de Northwold, early 13th century, in Ely Cathedral has certain features which became more common in alabaster tombs of the late 14th and 15th centuries, small figures of weepers under canopies flanking the effigy. The architectural canopy is highly ornate and contains much foliate ornament. Does it need to be pointed out that he is lying down in what ought to be a vertical arrangement? If you have read the previous blog postings on this subject, you will have noted that already. The actual effigy is a bit the worse for wear, but the tomb has one unusual feature. 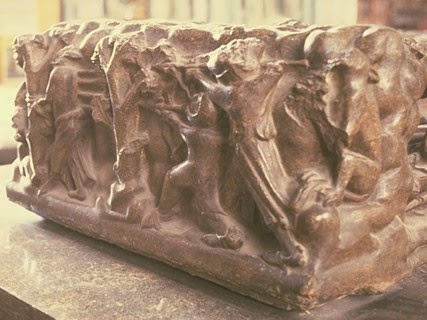 At his feet is a sculpted scene of the martyrdom of St Edmund, along with a couple of wild looking beasties at the side. These tombs had some experimental features, but like those of other orders of society, clerical tombs became quite stereotyped, even at the higher orders. Neither of these tombs, or the other early ecclesiastical tombs in these cathedrals, appear to be in an original setting. The effigies are set out on plain plinths as a homage to the ancient history of the institutions. 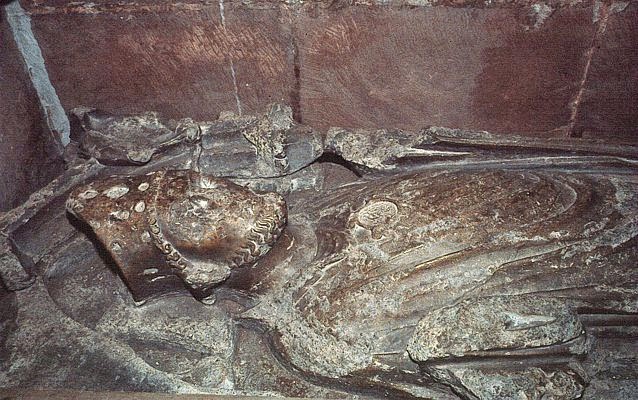 There is no reason to believe that the stark and simple aesthetic in which these tombs are currently presented represents their original state. The very battered 13th century Purbeck marble effigy of a bishop in Carlisle Cathedral has indents carved in his mitre for the insertion of jewels (or imitations thereof) and it can be presumed that the effect would have been rich and colourful. 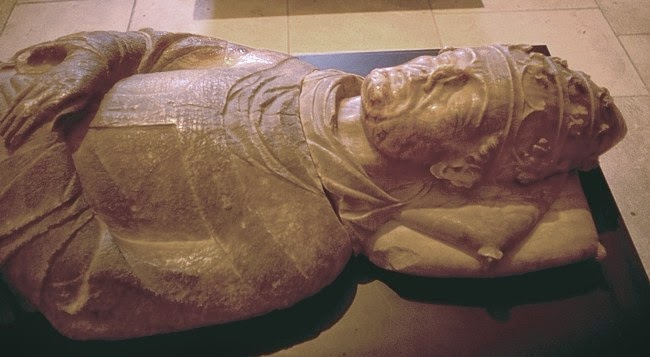 The significata of priestly function were also significata of rank within the church. Pope Urban V wears his triple deckered papal tiara where he lies, broken and decontexted, in the Petit Palais museum in Avignon, France. 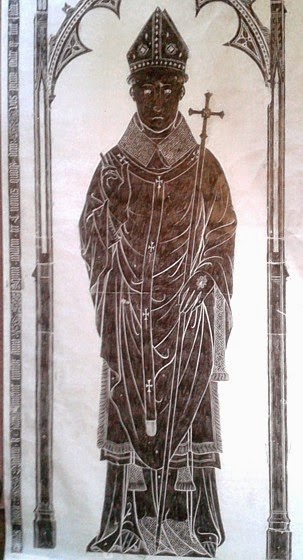 Brasses were also employed for high ranking prestigious tombs of the clergy. This is a rubbing from the tomb of Robert de Waldeby (1397) in Westminster Abbey. It sits on a table tomb in the chapel of St Edmund amongst the glorious jumble of royal, noble and generally high ranking tombs in the eastern end of the building. While he is lying on his back in reality, he is depicted as if standing and his hand is raised in benediction. He is still engaged in doing his job, even at this late stage of his departure from this life. His cross and various vestments are depicted meticulously, including those particular to his rank as archbishop. The monument is huge, about 3 metres long, so it is a grand memorial to an important man. 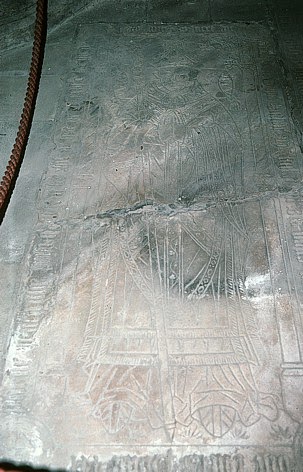 Incised slabs could also form the monuments for important clergy, as in this one to Abbot Barwick of Selby who died in 1526, fairly late in the era for English abbots. It is quite hard to make out and it seems reasonable to assume it may have had something in the incised lines to make them stand out. Incised slabs are more readily damaged over time and it can be seen that this one has been cracked right across. It also has no other tomb setting but is set into the floor beside a couple of other slabs in even worse condition. It most likely only survives at all because Selby Abbey church was converted into a parish church at the Reformation and thereby saved from destruction. The demolition or damage to so many abbey churches has resulted in smaller rates of survival of monastic effigies, but as with the monarchs discussed in the previous blog, it seems that not many tombs or effigies were rescued and relocated. Some were, but it seems the majority were not. Was it fear of reprisal by nasty Henry on any families that tried such tricks, or had they essentially served their purpose by that time? Hold that thought along with all the others we are filing as we go along through this series.

This abbot shaped puddle in the ruins of Byland Abbey in Yorkshire is perhaps the most stark reminder possible of what has been lost. It is the indent of a brass to a former abbot. These remote Cistercian sites have more extensive ruins than most monastic complexes (Yes, that's another BIG photography project in the offing.), but tomb remains are sparse. 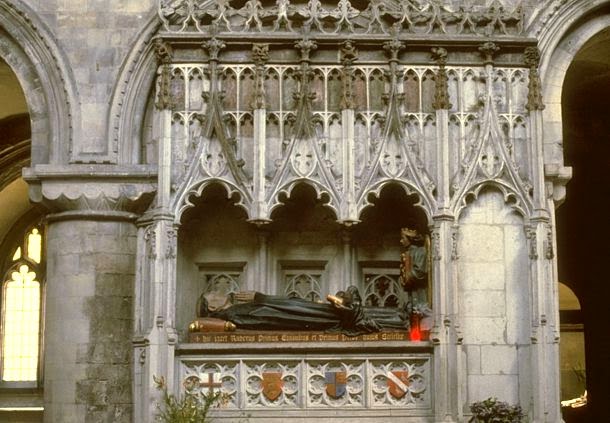 The tomb of Rahere in the remains of the Augustinian priory church of St Bartholomew in Smithfield, London seems to be a slightly different concept of commemoration. He was the founding prior in 1123 and evidently died in 1144, but this tomb appears to be much later, at least 13th, maybe early 14th century. As with the preservation of the tombs of the early bishops and abbots of Ely and Peterborough, the tomb has a strong historical association. The prior is shown in plain ecclesiastical attire, but the tomb has all the indicators of purgatory and liminality, as well as a heraldic display. 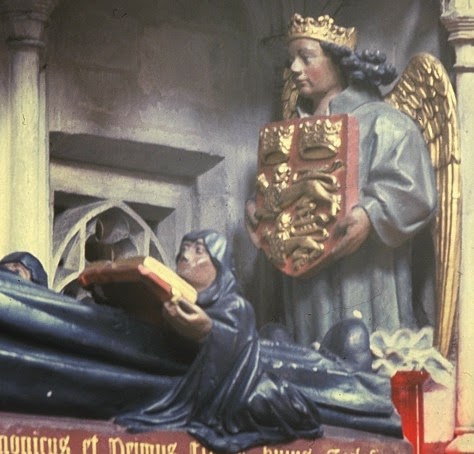 His hands are praying. An angel with a heraldic shield stands at his feet ready to help him on his way and two little monks kneel with enormous books beside him, encouraging the onlookers to pray. This tomb survived the partial destruction of the church at the Reformation, not to mention the wartime disasters of the 20th century, although from the modern paintwork it has clearly been restored. Nevertheless, from the date of its construction it must have been conceived as a long term memorial.
As with lay memorials, the use of effigial tombs travelled down the social scale, so that even ordinary parish priests had tomb monuments. Brasses, sometimes of very small size or even small half effigies, were popular for priestly monuments. Possibly for priests from modest families these may have been funded by the congregation. Who knows? 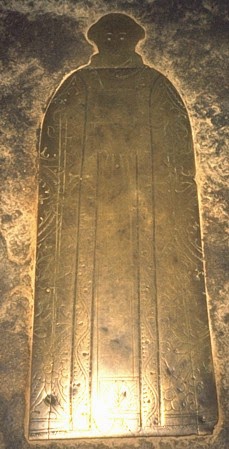 This small effigy of a priest in the tiny village of Beeford in East Yorkshire is an example of the modest priestly brass. He is not wearing his mass vestments but a fancy embroidered cope. 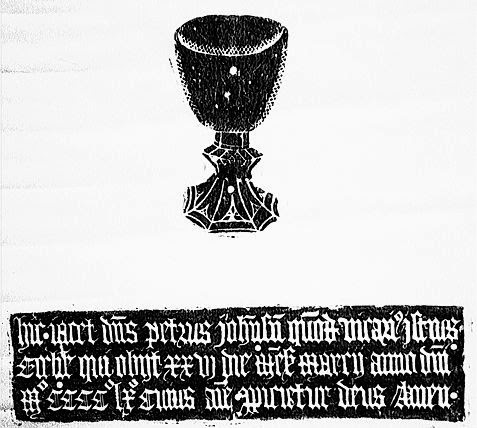 In the simplest form, the priest could be represented by his emblem of office, the chalice. The above shows a rubbing of a chalice brass with inscription to Peter Johnson, vicar of Bishop Burton in East Yorkshire. The chalice symbol appears on incised slabs with a cross, and full sized priestly effigies are also found holding them. In fact, the actual chalice seems to represent the only form of grave goods regularly encountered in medieval Christian burials, of priests of course: chalices, patens, bishops' rings, croziers. Make of that what you will. 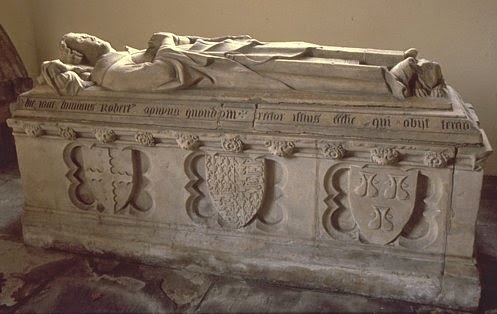 Fancy and elegant tombs do appear for ordinary parish priests, sometimes in modest little places. The above example, which also has the advantage of a surviving inscription, is in the church of Blyborough in Lincolnshire. Presumably wealthy families whose members had joined the clergy funded these as they did for the knightly tombs of their lay family members. This tomb has the standard motifs of angels (decapitated) by the pillow and praying hands (with fingers broken off), as well as the symbols of status in some conspicuous heraldry. His feet rest on a beastie, as do those of a knight.
Conceptually, the tombs of the priestly caste are the same as those of the laity; the symbolism of purgatory and liminality, the significata of status and some intriguing anomalies in their preservation and display.
The next exciting episode will look at the tombs of those who were not of the knightly or clerical classes, and how they expressed their values.
Posted by Dianne at 6:17 PM