I think my very favourite English church is All Saints, North Street in York. Unusual design, sits down there by the river, sports an angel roof and at one time constantly reeked of incense. The greatest treasure of all is the collection of late medieval stained glass windows. Like most of their kind they have been moved, damaged, restored, jumbled, but they are still an amazing collection, and that in a town which has vitreous wonders dotted around it in many churches great and small.
Some of the windows have less than common iconographic schemes, of which perhaps the most unique is the Pricke of Conscience window, illustrating an English language medieval poem about the last days of the world. This poem was once attributed to Richard Rolle of Hampole, but has since been re-assigned to that most prolific of English authors, Anon. It is a very, very long poem, and the window illustrates one short segment of it, listing the events of the last fifteen days of the world. It reads from left to right, bottom to top, like a strip cartoon. 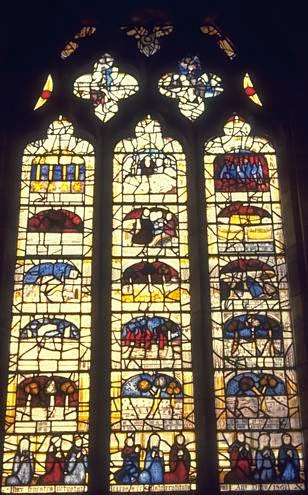 Two panels are in the wrong order for the poem, the second top right and the top left. This may have occurred during restoration of the glass at some time. The bottom row represents the donors of the window, praying for their own salvation. In the tracery lights St Peter leads the blessed to heaven and demons take the damned to hell, so get praying. Sorry, I don't have a good picture of those panels.
So far we have the standard "lessons for the illiterate" paradigm, but it isn't quite so. Each panel has two lines of the poem written beneath it in chunky Gothic script. Some of these do not survive complete, but they were there. So it is not just a picture book, but a Reader's Digest; a potted summary of the most important lessons from a very long literary work that even the literate among the congregation may have found daunting to read in full. So this is how it goes.
(Text from version by Richard Morris, 1863 from Corpus of Middle English Prose and Verse - starts on p.129. As is apparent it doesn't match on every panel, so there must be variant texts, and the thorns have all been turned into th for easier typing. The spelling checker will now proceed to explode.) 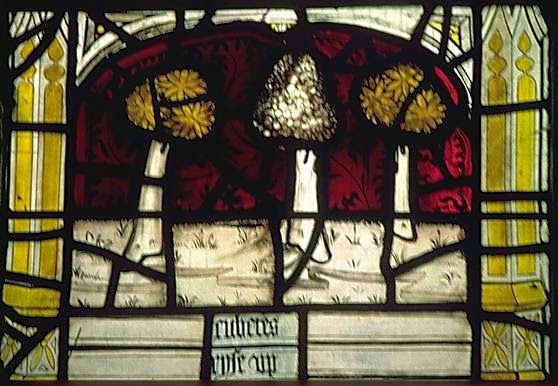 The first day of thas fiften days
The se sal ryse, als the bukes says,
Abowen the heght of ilka mountayne,
Fully fourty cubyttes certayne,
And in his stede even upstande,
Als an heghe hil dus on the lande 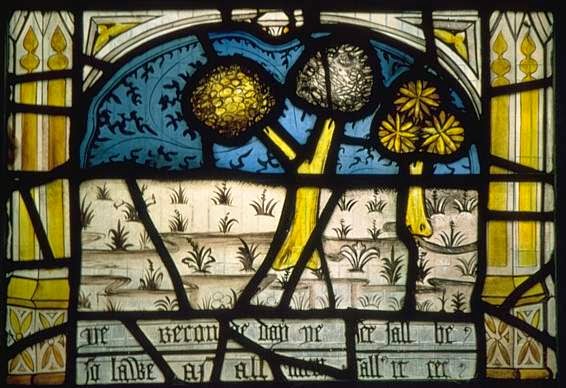 The secunde day, the se sal be swa law
That unnethes men sal it knaw. 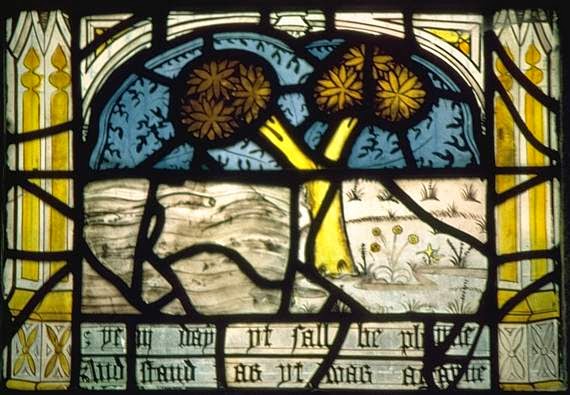 The thred day, the se sal seme playn
Ans stand even in his cours agayn
Als it stode forst at the bygynnyng,
With-outen mare rysing or fallyng. 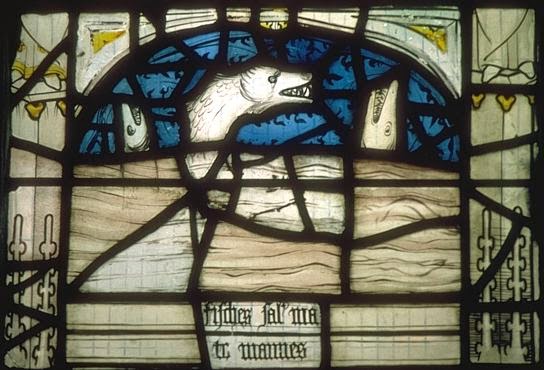 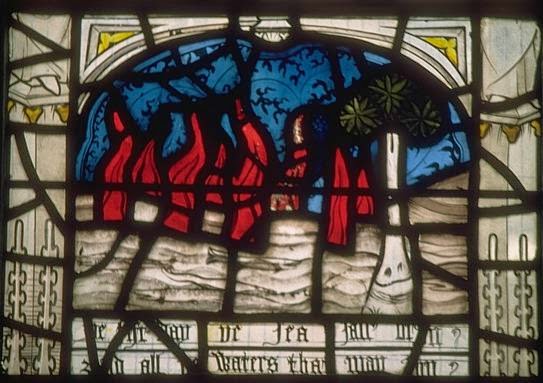 The fift day, the se sal brynne
And alle watters als thai sal rynne;
And that sal last fra the son rysyng
Til the tyme of the son doun gangyng. 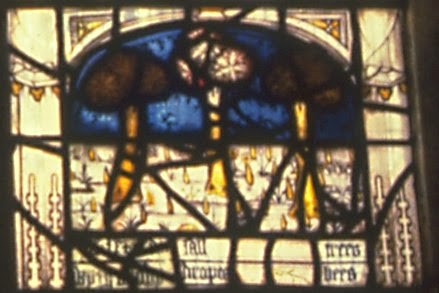 The sext day, sal spryng a blody dewe
On grisse and tres, als it sal shewe. 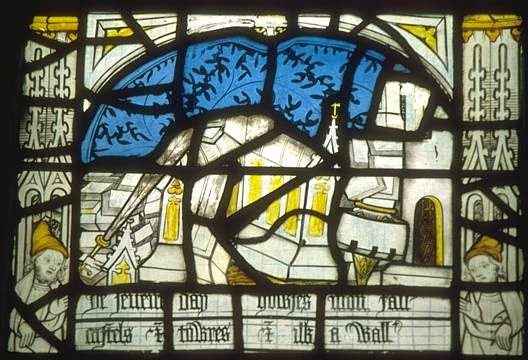 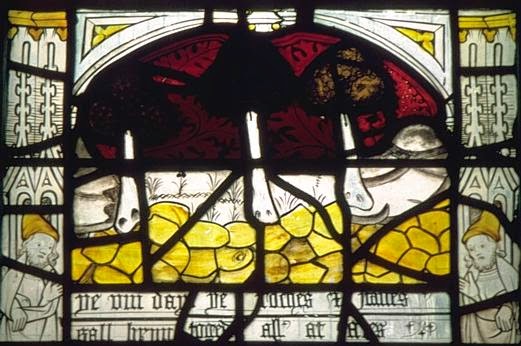 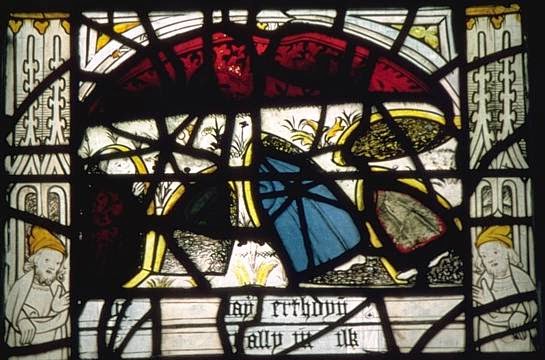 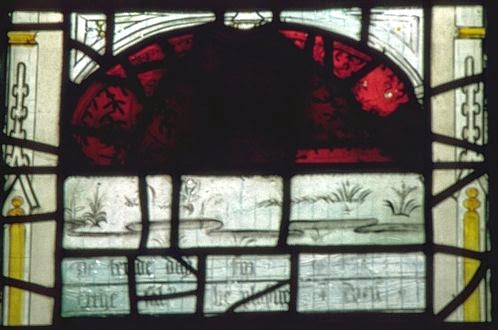 The tend day thar-aftir to neven,
The erthe sal be made playn and even,
For hilles and valeis sal turned be
In-til playn, and made even to se. 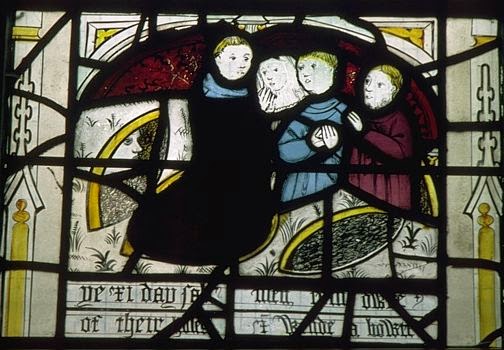 The ellevend day men sal com out
Of caves, and holes and wend about,
Als wode men, that na witt can;
And nane sal spek til other than. 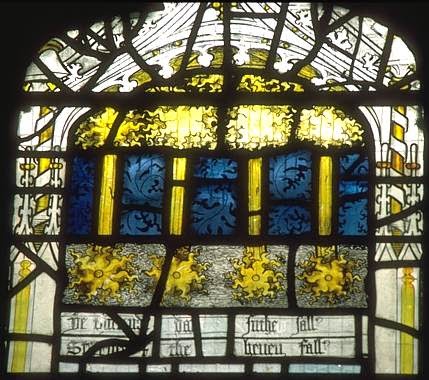 The twelfte day aftir, the sternes alle
And the signes fra the heven sal falle. 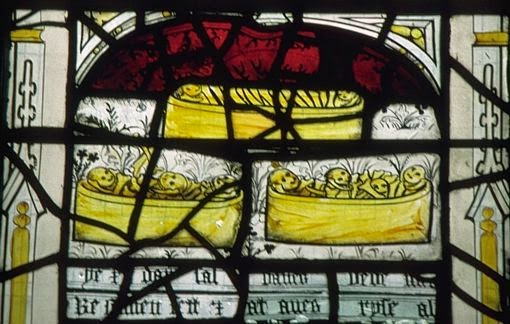 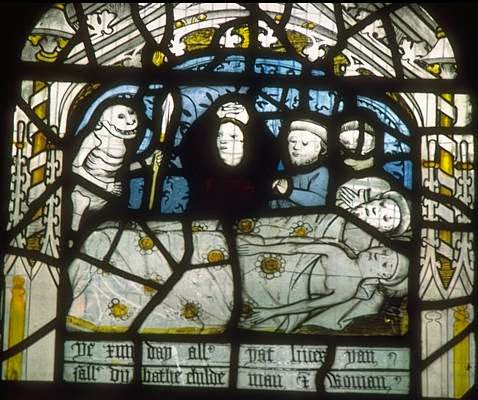 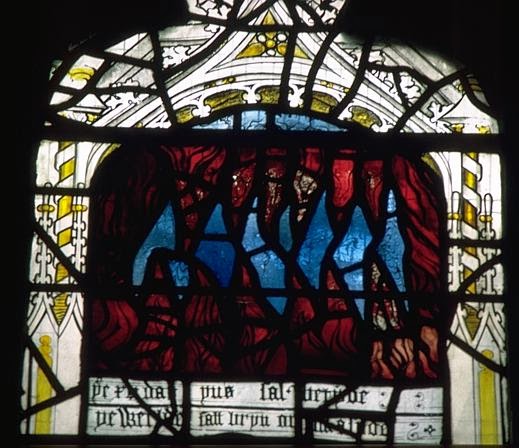 The fiftend day, thos sal betyde,
Alle the world sal bryn on ilk syde,
And the erthe whar we now duelle,
Until the utter end of alle helle.

So there you have it; the sea rising and falling, fish gathering and roaring, the sea burning, bloody dew, earthquakes with castles and towers falling, rocks breaking each other apart and the earth flattened, people crawling out of holes just in time to see the stars falling, the bones of dead people reassembled and then everyone dies so they can rise again, after the earth has been destroyed by fire. I guess they picked those lines for their marvellous pictorial possibilities. After all, a hundred pages or so on the sayings of the Anti-Christ just wouldn't have the same visual impact. Be very scared. Pray. Be good.
What does it say about lay literacy? The words are there for the reading in the vernacular. It even has a bit of a northern twist to it. I can hear it in a Yorkshire accent. But the assumption seems to be that the written text must be extremely abbreviated and rendered visually. Narrative, yes, but not too many words.
The church of All Saints, North Street has applied for a Heritage grant to restore and protect these windows for future generations. Check out all their news on their own website.
Posted by Dianne at 5:37 PM