Back in the mid 1990s, Tillotson and Tillotson decided it would be a really good idea to produce some teaching software for medieval history using this newfangled multimedia technology. We thought we produced some pretty hot stuff for a couple of amateurs: amateurs at IT that is. Of course, we all know what happened after that; new operating systems every Thursday, the internet gets useful, then brilliant, development software companies go phut. The Medieval Writing website was the only thing rescued from the wreckage.
Of course I backed everything up. How dare you suggest otherwise. I have multiple backups on everything from ZIP disks (remember them) to the cloud (just hope it doesn't rain). Only problem is, I have only one antique computer that can run the software I used to create these masterpieces, and it takes up half my study and is showing signs of being about to die.
Now one of the very good pieces of advice I received at that stage, and dutifully passed on to everyone else, is that you should always keep a copy of the text of whatever you are doing in a simple text format so that it isn't platform dependent. Blush. I now discover that the text material in my multimedia files cannot be exported, or even cut and pasted out without displaying loads of crap code.
Part of the reason I didn't  do it was because of ideas and experiments in multimedia design. IT gurus assured me that nobody these days would scroll down a page to see what was at the bottom, and that multimedia pages should be designed to fit on the screen. So the text was all broken up into little boxes, some of which popped up out of nowhere when you moused on things and dissolved away when you were finished, or appeared in separate little windows or did any number of those dinky little multimedia things which are SOOO 1990s. That also means I can't just print if off. And now everybody happily scrolls down web pages without having a nervous breakdown about it.
I once wrote a blog posting about how web pages are more like medieval manuscripts than the pages of printed books, but now I find myself regressing in a less delightful way, copy typing madly like an old fashioned office slave in a typing pool, trying to beat that sneaky red stain which is creeping into the corner of my old CRT monitor and hoping that checksum error on bootup will allow me to ignore it for a bit longer. 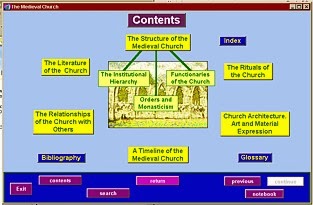 And there's a sample screenshot in all its glory, complete with clunky buttons, 256 colour graphics, popup subheadings on mouseover and navigation buttons all over the place, not to mention a strictly rectangular design that fits even on ye olde 800 x 600 screen (or whatever it was back then). Pity you can't hear the spasm of Gregorian chant that plays while you contemplate which button to push. Only the Glossary has so far made it to the web.
Hope you scrolled down for a look at it.

You haven't said what the current problem is Dianne?

Your readers may be able to help?