BSL, just when I thought Geoffrey Chaucer Hath a Blog was the silliest medieval oriented thing on the web, I find out about this. I received an email from an anonymous private secretary to the Lord of Kinterbury requesting permission to link to my website if I would link in return to The Ancient and Medieval Honour Guild. Now Medieval Writing is entirely public and anybody can link to it. Feel free. But his Lordship's little effort is only accessible, apart from a few entry screens, to persons who can prove they are descended from medieval knights and who hold a manorial title such as Lord or Lady, and they are dedicated to the highest moral ideals of chivalry etc. Well, that last is a good thing, but I wonder whether it extends to chivalric attitudes to the descendants of jugglers and criminals, recent immigrants to Olde Englande and other diverse members of the human race. 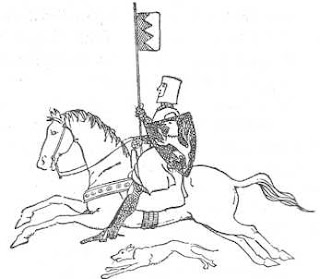 I mean, are they really still like that in England? I do remember when I was living there at some stage in the past there was talk about reform to the House of Lords, and a peer of the realm was arguing quite genuinely on TV that he was one of the people who should be leading the country because he had a hedge on his estate that dated to Anglo-Saxon times. They dutifully showed a picture of the hedge, and I couldn't believe my little Aussie ears.
I suppose the private secretary didn't know he was writing to a lefty, pinko, socialist, republican Australian descended from miscellaneous bods who had fled their motherlands to live in a country where they were not subjected to anachronistic, feudal-descended attitudes. I answered him quite politely. I think.
PS. In relation to recent postings on this blog, the header of said site is illustrated with a picture of some ye olde distressed parchment and a modern fountain pen which has leaked blobs all over it. I invite learned iconographic analysis of this imagery.

The writer of this comment emailed it to me rather than posting it, so I present it herewith:

I am responding to your blog about The Ancient and Medieval Honour Guild you posted Sept. 12 on your Medieval Writing site.

“…I wonder whether it extends to chivalric attitudes to the descendants of jugglers and criminals, recent immigrants to Olde Englande and other diverse members of the human race.”

I would hope many people, regardless of their ancestral heritage, would be guided in their lives by chivalric attitudes. But this organization is designed for those who can prove their ancestral heritage to the Medieval era, regardless of the country in which they now reside. Certainly, membership is not limited to England. My ancestral heritage is extensive, and I live in the United States. I find the site quite appealing, and it is a good place for those of us who know who our ancestors are to be able share family information and extend the historical aspect of our lineages.

“…descended from miscellaneous bods who had fled their motherlands to live in a country where they were not subjected to anachronistic, feudal-descended attitudes.”

You personally may not know who your ancestors are, but it shouldn’t prompt you to think it necessary to make fun of a site like The Ancient and Medieval Honour Guild for whatever reason.

I was curious about the term you mentioned, “feudal-descended attitudes.” Perhaps you are so wrapped up in your own field of Medieval writing, that you have failed to notice that all around the world, feudalism is still at work – the rich get richer, the poor get poorer, the "haves" ruling the "have nots," etc.

“… the header of said site is illustrated with a picture of some ye olde distressed parchment and a modern fountain pen which has leaked blobs all over it. I invite learned iconographic analysis of this imagery.”

And what better way to illustrate ties to the “olde” past than to use a more modern fountain pen on “olde” parchment. We do live in the 21st century after all.

Just a few points from me (Dianne):
1. All of us have links to our medieval heritage. It's a fact of biology.
2. I know who some of my ancestors are, and they are as worthy as anybody else's, just not members of the landed aristocracy.
3. Feudalism does not refer to the rich getting richer and the poor getting poorer. It refers to a form of land tenure which has as its consequence the rights of some individuals over the bodies and souls of others.
4. In the 21st century fountain pens still leak?

There are, alas, a few people left in England who think like this. When the previous government made a half baked attempt to reform the House of Lords, the heir to the Duchy of St Albans, who can trace his ancestry all the way back to a snack vendor in a 17th century theatre jumped up and down on the Lord Chancellor's chair and shouted slogans until they threw him out. I firmly believe that if they'd held a referendum on a republic the next day it would have passed overwhelmingly.

It's all a bit embarrassing really. (NB the Duke of St Albans is a Jacobite. For real.)

It's all about jealousy. Rest my case.