My two granddaughters, aged nearly 8 and nearly 11, have just been participating in what are called NAPLAN tests at school. I can't remember what NAPLAN stands for, National something-or-other, but they are basic tests of literacy and numeracy, the basic function of which is to see whether kids across the land are meeting appropriate standards in these subjects. Pretty harmless and sensible, you might think.
Schoolteachers, however, have been whipping themselves into a frenzy of hysteria over it all. Apparently teachers are the only members of the work force who should not be subjected to any kind of scrutiny on the quality of their work. They are also, by their own telling, so naturally dishonest and devious that they very idea that their pupils may be assessed will inevitably cause them to cheat on the testing. And to think that they keep lecturing us on the subject of "values"; a concept dragged into the school lingo by a previous Prime Minister of our fair land who thought that the only people who had any were right wing, avowedly Christian, white males in suits. Ouch, we are getting  political; time for a diversion.
The teachers also claim that the tests put incredible stress on the kids. I checked this out with my two, who seemed perfectly cheerful about the whole process. When I asked them if anybody had got upset, they did mention one boy, but he has a habit of throwing stress attacks while playing sport, at birthday parties, and possibly represents a child at the stress laden end of the spectrum. As my older granddaughter has a mode of spelling that would grace Geoffrey Chaucer Hath a Blog, I cannot imagine she will do much for their general score, but she was not in the least stressed about it. 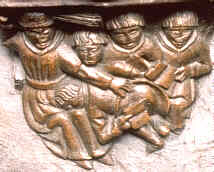 Personally, I think a little stress to achieve does you good. Not that I would advocate beating Latin grammar into the little possums with a birch rod, like they did in the middle ages. It seems a little strange to me that we are so accustomed to literacy and its use in every aspect of what we learn that we find it hard to imagine how much was learned in a non-literate mode in ages past, but we think that assessing the level of literacy that we are achieving poses unacceptable stress. I think there is possibly more stress involved if your deficiencies in the area of literacy only show up at your first job application.

There has been a little hiatus on updates to the website lately, due to real life interfering with virtual reality, but hopefully I will be adding some new sections soon.
Posted by Dianne at 1:16 PM

Email ThisBlogThis!Share to TwitterShare to FacebookShare to Pinterest
Labels: literacy

I clasp in every expressly betide on your Internet gradient and I stuff aver that it my much and wonderful article to the passage.

I just added your weblog site to my blogroll, I wish you would think of doing the same.

Before I go, permit me thank you for your understanding with my English as (I am positive you have become aware this at this moment ,), English is not my main tongue hence I am utilizing Google Translate to build out how to jot down what I sincerely intend to articulate.