So far in this series I have looked at medieval memorials that are essentially grave covers, at least in theory, although some of them depicted people who were buried in other locations, or only certain parts of them were buried at the commemorated spot, or their remains or tombs had been moved. Within churches there were various other ways of commemorating the dead, especially if their good works in life had included donations to the fabric or treasures of the church in question.
Sally Badham's recent book, Seeking Salvation, gives copious examples of other church works which can be regarded as funerary memorials, indicated by inscriptions on walls and furnishings, church plate and many instructions in wills for donations to the church. Stained glass windows also come in here, and she points out that all of these are visual reminders to the congregation to pray for the souls of the departed to hasten their trip through purgatory.
Purgatory was a big deal in the 14th and 15th centuries, when church art and commemoration was developing in elaboration, but as I have mentioned before, purgatory was an official church doctrine which allowed expression for concepts of liminality concerning death. Those concepts have been expressed in different ways in other times and in other religions and cultures.
The 14th and 15th centuries were also a time when traditional social hierarchies were being challenged and social stratification, although well and truly still there, became very competitive. This was evidenced in many aspects of life, including rapidly changing fashion utilising fancy imported fabrics, massively competitive dining habits, more lavish houses for those who could have them, and posh book ownership. In competitive societies, worth is displayed by not only what you have, but what you can afford to give away. In societies with very different religious beliefs, funerary ceremonial could involve large and often complex redistributions of wealth. Funerals and mortuary gifts certainly encouraged others to pray for your soul, but also increased the standing of you and yours in society. Besides, they then made other people obligated to you and yours, should fortunes reverse.

The simplest easily recognised visual symbol for the folks of the congregation was probably heraldry. The above example comes from St Martin's church in Stamford, Lincolnshire. They shields were often depicted being carried by little angels, which has parallels with the angels carrying the souls of the departed also found in funerary depictions. The heraldic device might indicate that the family concerned had built their own funerary chapel, or had contributed in some other way to the fabric of the church. These are very commonly found, sometimes sprinkled among the more didactic panels of the windows. 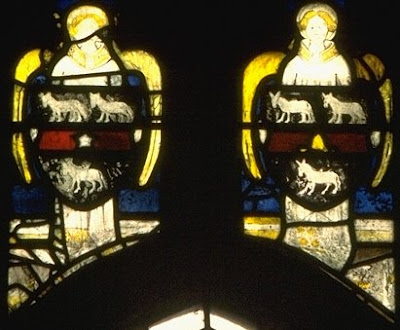 Here is another example from a small northern town, Thirsk in North Yorkshire. I don't suppose the coat of arms actually represents three donkeys but it looks a bit like it. Such panels no doubt encourage prayers for the soul, but they also stamp a certain authority on the congregation. 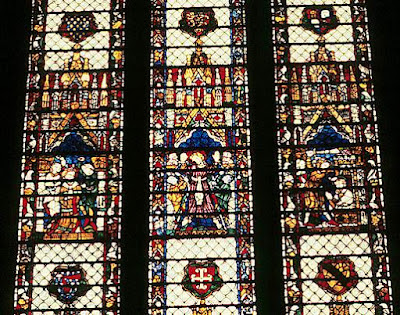 The de Mauley window in the south nave aisle of York Minster has eight coats of arms associated with the de Mauley family, sprinkled between the usual scenes of martyrdom and mayhem, and representations of members of the family in the lower panels. It has to be said that this is virtually a copy of the original window after a drastic restoration in 1903, but you get the idea.
Occasionally you can find a heraldic shield in a window that matches one on a tomb in the church, indicating that these are not either/or modes of commemoration but part of the whole cornucopia of ways that people could be remembered, respected and hopefully hastened on their way to glory.
A more personal representation is found in the simple kneeling donor figure, usually found modestly in the bottom corner of the window. 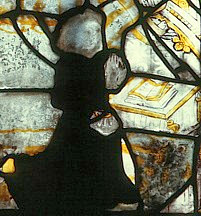 This somewhat effaced little figure from Thornhill in West Yorkshire is depicted in civilian clothes with his purse slung on his belt, not armour, reflecting the new order of town life when you could have influence with money rather than coats of arms. He is kneeling at his prayer desk with the prayer book open, which is about as clear a reminder of what you are supposed to do as you can get. 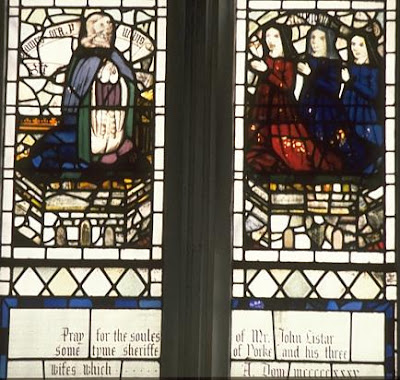 This donor panel in St Michael-le-Belfry church, York has an inscription encouraging you to pray for the donor and his three wifes. The convention of showing successive spouses all kneeling together is not unusual. Time collapses when you're dead. Many donor panels contained these inscriptions, but some have been lost, accidentally or on purpose when the glass was reset in times of religious change. The desire to perpetuate the memories of families outlived the need to believe in purgatory. Similarly the "orate pro anima" part of tomb or brass inscriptions has sometimes been effaced, a symbolic gesture making the memorial correct in religious terms while still commemorating the departed, and reminding folks of the significance of the surviving families. 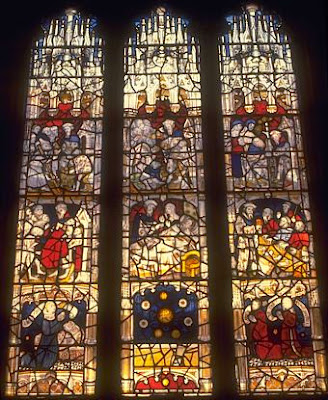 This window in All Saints North Street, York has multiple references of this type. The kneeling donor  figures in the lower panels have come from a different window. Stained glass is always mixed up because of the need for regular repairs and renovations. Nevertheless they are two of several representations of this type in this particular church. The six panels above represent the corporal acts of mercy. I have written about this in another blog posting here. The acts of mercy are being administered by a benign looking bearded man who looks much the same in every panel, and it has been assumed that this figure represents the donor of the window; a reminder of how he has redistributed his wealth for the benefit of the parish. 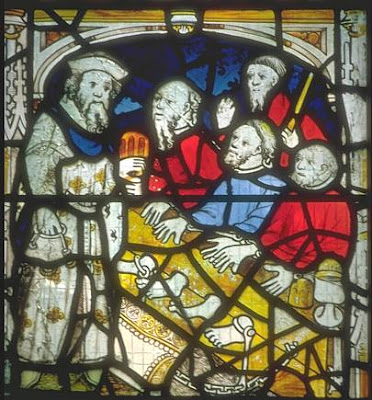 Furthermore he is rich and he wants you to know it, because he is using his wealth for virtuous purposes. Here he is dipping into his large money purse to bail out some prisoners in the stocks. Acquiring wealth is fine if you give it away in a virtuous manner. Pray for his soul please, and look after his heirs. 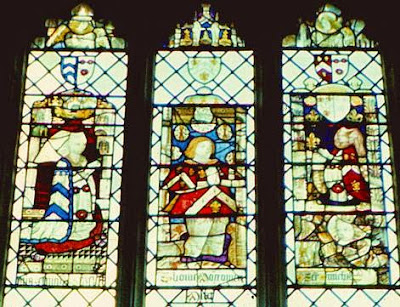 The windows in the wealthy church that wool built in Long Melford, Suffolk display more of the symbols of power and less of virtue in the figures of the donors. Sure, they are kneeling praying so please remember to say a prayer for them, but they are togged out in very conspicuous heraldic rig, wearing their coats of arms all over them. They built this church and they are important. 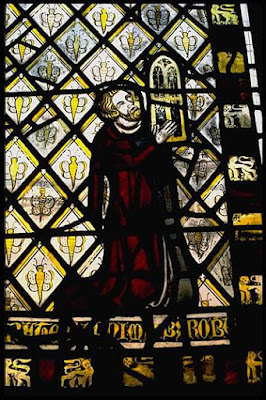 The nature of the donation can be made quite explicit. This kneeling donor in St Denys church, York, dressed in civilian clothes, is holding the window he has donated, just so that you know exactly the nature of his benefaction. This is analogous to those tomb figures of bishops and knights holding models of churches they have funded. And no, I don't know whether he was a wealthy beekeeper. 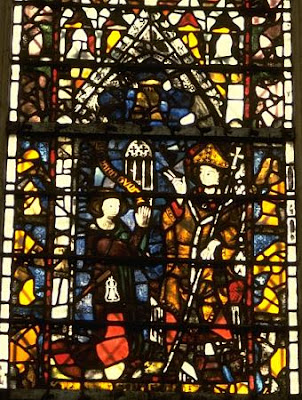 Donors commemorated in glass did not have to be individuals. The guilds of the towns had the function of caring for the spiritual needs of their members as well as their conditions of work. This window in York Minster was presented by the bellfounders and some panels contain representations of aspects of the bellfounders' art. This panels shows the presentation of the window to the archbishop, with the usual supplicatory imagery and a depiction of the window in the glass itself, so everyone gets the point. It symbolises the social importance of the town trades, who are acting like aristocrats of old in their dealings with the community, as well as encouraging prayers for a group within the commnity. 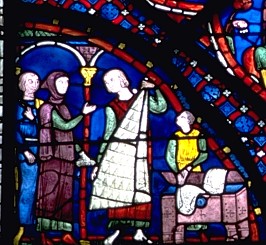 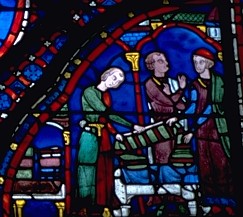 The most famous examples of this type of commemoration are across the Channel in France, in the cathedral of Chartres, where all the various craft guilds which contributed to the building of the cathedral are commemorated in the amazing program of stained glass windows. They are not depicted praying or with symbols which specifically encourage others to pray, rather shown just going about their work, but they are included in the lower panels of the instructive windows. The examples above show the furriers and the drapers. Perhaps they somewhat predate the full expression of the concept of purgatory in church art, but their contribution to the church fabric and life is being appreciated.
It is reasonable to regard these types of windows as funerary memorials in just the same way that we regard grave slabs or effigy tombs. They serve the same purpose and utilise similar iconography. They perpetuate memory beyond the grave.
Posted by Dianne at 6:13 PM